Daughter of Hernando caused a 33-1 upset at Epsom

Look Here, winner of the 2008 Oaks, has died aged 14 after losing her battle with colic.

Trained by Ralph Beckett, Look Here finished third to Conduit in the St Leger and was third in both the Coronation Cup and Pretty Polly Stakes as a four-year-old.

Out of the Rainbow Quest mare Last Look, whose dam Derniere Danse was a half-sister to the high-class sprinter/miler Pursuit Of Love, Look Here has produced three winners to date.

The best of her offspring to race is the Pivotal filly Hereby, a progressive three-year-old this year who recorded four successive victories (and five overall), taking the Listed Noel Murless Stakes at Ascot in early October.

Hereby is retained by her breeder and will be a fine addition to his broodmare band at Lawn Stud when her racing career is over.

Richmond-Watson’s Kinross, a son of Kingman out of Ceilidh House, heads the betting for the Group 1 Vertem Futurity Trophy at Newcastle this evening. 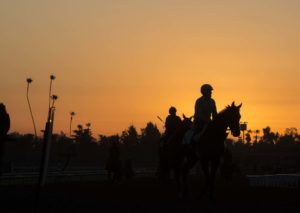