Winning all over the world
Stories

Long may he run

One of the main draws of National Hunt racing has always been the longevity of its stars. Fans of the sport, who have waited all summer to see the top performers return to the track as the nights are drawing in, would have been delighted with the seasonal resumption of Tidal Bay, winner of the Grade 2 Bet365 Hurdle at Wetherby on Saturday.

Now 12, it’s fair to say that the son of Flemensfirth has been something of an enigma throughout his seven years in training but there’s no doubting his ability. Bred in Ireland by John Dorgan, he spent his formative years in Northumberland with the Charlton family, who picked him up as a foal for a mere Ir5,800gns at Tattersalls Ireland’s November Sale.

Initially trained by Alastair Charlton for his father George, Tidal Bay was second twice in his first two bumpers, including the Grade 2 John Smith’s Champion NH Flat Race during the Grand National meeting, and suddenly became a much more valuable prospect. Sent to the DBS May Sale the month after his good run at Aintree, he was bought by his second trainer, Howard Johnson, for £300,000.

In his first start in the colours of Andrea and Graham Wylie he became a winner, and his record now stands at 15 victories from 39 races, plus 15 placed finishes. The 2009 Grand National, in which he unshipped Brian Hughes, was to be Tidal Bay’s last start for the now warned-off Johnson, and with nine runs under his belt for Paul Nicholls, he has won four of his last five races and finished second to subsequent Cheltenham Gold Cup winner Bobs Worth in the Hennessy Gold Cup.

Having recorded back-to-back wins in the Bet365 Hurdle, this time grinding down Coral Cup winner Medinas on the run-in, the veteran could now be aimed at further Grade 1 success, with Haydock’s Betfair Chase an option. With three Grade 1s already to his name – including the Arkle Trophy at the Cheltenham Festival and last season’s Lexus Chase – Tidal Bay owes his connections nothing. But he has given them a heap of fun along the way and his many fans will be hoping that this continues to be the case. 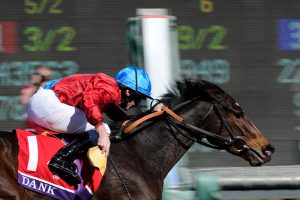 Up Next
Winning all over the world