The Treve of life
Stories

London Sale to be memorable event

When Goffs announced the staging of a bloodstock sale in central London, it promised a ground-breaking venture and the early hype has now turned into exciting reality with the inclusion of 19 horses holding Royal Ascot entries in the Monday night extravaganza.

In total, 36 breeze-up horses have been catalogued for the sale on the eve of the Royal meeting, which is being run in partnership with QIPCO at The Orangery in Kensington Palace with a video link to the horses parading at Kempton Park racecourse. The breezers will be followed by 22 horses in training, headlined by the recent Poule d’Essai des Pouliches place-getter Pornichet, who not only holds an entry for the Jersey Stakes two days later but also an invitation to run in the Belmont Derby in New York.

Also among the horses in training being offered are the John Ryan-trained Ocean Tempest, whose terrific season has included wins in the Lincoln and two Listed victories at Ascot and Windsor. He holds an entry for the Royal Hunt Cup along with Boomshackerlacker and Regulation, both of whom are also catalogued.

An extra twist to the evening’s proceedings was announced this week with the addition of a lifetime breeding right to Invincible Spirit to the auction items. One of Europe’s elite stallions, the Irish National Stud resident is enjoying another successful year as sire of Irish 2,000 Guineas winner Kingman and is currently second only to Galileo on the leading sires’ table.

“The Goffs London Sale in association with QIPCO is a truly unique event and the addition of lifetime breeding rights to the Irish National Stud superstar Invincible Spirit only increases the ground breaking nature of the sale,” said Goffs Chief Executive Henry Beeby. “It is some time since the days when DBS conducted Shares and Nominations sales and we return to the concept in some style. This special lot superbly compliments our collection of world class two-year-old breezers and truly exciting form horses which should lead to a vibrant and memorable sale.”

The Goffs team has worked with Weatherbys and the British Horseracing Authority to ensure the speedy transfer of ownership in any horses sold with Royal Ascot engagements. All lots will be stabled at Kempton Park racecourse, where the breezers will be put through their paces on Saturday, June 14 at 10.30am. Horses will be available for viewing in the racecourse stables on Saturday, Sunday and Monday, with the London Sale taking place on Monday, June 16 at 5pm. 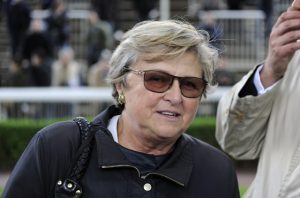 Up Next
The Treve of life