Peter and Emma Hockenhull’s Shade Oak Stud will welcome 2019 St Leger hero Logician to its ranks for the 2022 breeding season in a boost for British National Hunt breeding.

That victory in the Doncaster showpiece went alongside the Juddmonte homebred’s success in the Group 2 Great Voltigeur Stakes. He was only seen twice more on a racecourse in 2020, having been treated for the potentially life-threatening condition peritonitis, and was stakes-placed on both his starts this year.

Peter Hockenhull said: “The purchase of Logician is the culmination of a four-year search to bring another top-class stallion prospect to Shade Oak, one with all the qualities needed in a champion National Hunt sire. Logician ticks every box.

“He is by Frankel, the best racehorse I have ever seen and now succeeding his own sire, Galileo, as the world’s best stallion, from a black-type mare that has bred six winners from six runners, including four black-type horses, and is herself half-sister to Cityscape and Bated Breath.

“He stands 16.2hh with great bone, plenty of strength and substance, a lovely walk and a fantastic temperament.

“He won the Great Voltigeur on only his fourth start and the St Leger on his fifth, in a record time, whilst easily beating top-class rivals such as Sir Ron Priestley, Nayef Road, Sir Dragonet and Il Paradiso.

“Sadly, John Gosden’s ambitious plans for Logician’s four-year-old campaign had to be abandoned after a life-threatening attack of peritonitis and pleurisy at the end of his three-year-old year, so he was unable to show just what he was innately capable of as a mature horse.

“However, I am encouraged that Juddmonte were keen to retain breeding rights in the horse for use on their own mares, so I look forward to some high-class runners by him not only over jumps but also on the Flat.

“I am extremely grateful to the Abdullah family for supporting British breeding by selling Logician to a stud in this country, and to Grant Pritchard-Gordon of Badgers Bloodstock, whose long-term association with Juddmonte, Prince Khalid’s family and this pedigree helped us greatly in this transaction.”

Juddmonte’s Racing Manager Barry Mahon added: “From the start Logician was a special horse, a standout yearling among the Juddmonte crop that year.

Happy retirement Logician – thanks for the memories @JuddmonteFarms

“His size, strength and beautiful action, combined with good conformation, had everyone excited from an early stage and he didn’t disappoint. His unbeaten three-year-old season ended with a dominant victory in the St Leger.

“Unfortunately, an illness later that year left him fighting for his life, but the same guts and determination he showed on the track thankfully helped him pull through.

“We have no doubt he was one of the very best middle-distance horses around. Being by Frankel, and given his exceptional physique and performance, Logician is a huge asset to British breeding.

“Shade Oak has guided many top-class stallions through their careers and I’m sure they have another top-class prospect on their hands.”

Hockenhull added: “At Shade Oak we stand only stallions that we really believe in; we stand them for the long-term and we support them with our own mares,” he said.

“Our shareholders in Logician share this vision and will also be sending him top-class mares.

“I am immensely excited by his prospects; he has all the qualities I have long sought in a National Hunt stallion – pedigree, performance, size, conformation, walk and temperament. He is virtually impossible to fault.

“The Great British Bonus and NH Elite Mares Schemes, championed by the Thoroughbred Breeders Association and supported by the Levy Board, are transforming the prospects for British breeders, making it possible for studs here to purchase stallions of the quality of Logician.

“For British breeders there is simply no need to send mares abroad in search of top-class stallions. Instead, support the ones standing right here and be eligible for 100 per cent GBB bonuses!”

Logician joins the roster at the Shropshire nursery that already includes Dartmouth, Telescope and Scorpion. A fee for the son of Frankel will be announced at a later date. 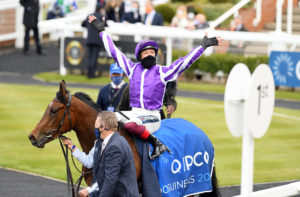 Up Next
Mother Earth victorious in Prix Rothschild