Reflecting on a rewarding term of office
Stories

That’s what racing’s chaplain, the Reverend Graham Locking, does and with today’s tough times his involvement is vital

As a chaplain, based in Newmarket, what is your exact role in horseracing?

My role is to offer pastoral care and to support members of the racing community. That means helping them when there are problems and encouraging them in their daily lives. I am on the gallops every morning and go to the yards so that people are aware of me.

I talk to trainers and visit stables, getting to know people and building relationships so that I can help if needed. Along with Racing Welfare and the Injured Jockeys Fund, I am always available. Instead of sitting in an office waiting for people to come to me I go out and meet them.


Why did you get involved in the sport and what is the most rewarding aspect of your job?

I got involved because my idea of what church is about – and it’s not preaching in a building – is relating to people. I started out working in the East End of London with homeless vagrants, alcoholics and drug addicts. I also set up a counselling centre in Sheffield and a neighbourhood youth play-centre in Birkenhead.

I have always enjoyed working with people outside the church and when the advertisement for a chaplain to horseracing appeared in the religious press 12 years ago, I was immediately interested. My grandmother used to take me to our local track, Market Rasen, as a kid and I used to love watching racing on television.

The most rewarding part is being able to help people. I conducted Michael Jarvis’s funeral in September and more recently did the tribute at the funeral of Robert Fellowes, who had been manager of Jockey Club Estates for 28 years. Another enriching experience was when a young girl at the British Racing School was going through a tough time. I was able to meet with her a couple of times and she is now a changed person.

It is not my job to preach religion, it is to help people

How do you balance religion with the unusual and, at times, eccentric world of horseracing?

For me, religion is a celebration of life; it is not about a restricted set of codes or practices. In all of that there are times when we do well and times when we don’t do so well, and racing is part of that life. It is not my job to judge people or criticise. If racing is getting a bad press that’s all the more reason I should be involved. That’s when people, who are struggling under pressure, are inclined to do silly things and need support and encouragement.

Can you get close to the trainers, jockeys and the stable staff?

We conducted a survey in 2009 and 87% of those surveyed in Newmarket knew me and over 91% of those I’d helped were more than satisfied. I was with Sir Henry Cecil when his brother David died and I am close to many of the trainers. I know the lads well, though staff does change all the time. If you show an interest in them and don’t talk to them about God they will respond.

It is not my job to preach religion, it is to help people and if I am going to do that I need to know those concerned. Therefore, when I go round yards I chat to them generally, maybe about their mother, their granny, their wife, husband, partner, children, even their football team.

One of my favourite sayings is: ‘I share the love of God with people every day, but only very occasionally talk about it.’ If I am going to care for people I must build relationships with them, not spew out a lot of religious claptrap.

Have you been more in demand since the economic downturn took hold?

I am not a clever shit with all the answers because I haven’t got the answers, but I can listen, sympathise and help. I realise they are going through tough times, though most won’t admit it publicly.

How big a problem is depression among racing employees?

About eight years ago in Newmarket we had three suicides all within about five weeks of each other and we got together Samaritans, a local drug rehabilitation unit, doctors and police to examine the question of drugs, alcohol and depression in horseracing. We discovered that racing does not have any more drug addicts, alcoholics or people suffering from depression than any other workforce. But we do have our fair share.

Racing is inclined to be labelled as having more gamblers and ne’er-do-wells than other sports, but it is not true; there are lots of people in the industry who lead normal lives. I accept that depression in sport is a big issue. I have a colleague, who works in the Premier League, and he is trying to help footballers suffering from depression.

The most common problem with the people I come into contact with in racing is self-esteem. Sometimes they get into such a mess they don’t believe in themselves. They come into racing with all the dreams in the world wanting to be jockeys, but the reality is most of them won’t make it. But they should realise that riding out is as important as being a jockey; the stable lad rides the horse every morning, the jockey only occasionally.

The trouble is stable staff have never been given the esteem or value they warrant as skilled people. So they become downcast and frustrated, and that can be expressed in drug addiction and alcoholism, which they misguidedly believe is making them worthwhile. Newmarket has a drug problem, but no worse than the average town.

Do you ever get calls from trainers or jockeys when they are on a bad run?

I don’t have a lot of dealings with jockeys because they are always on the move and trainers won’t come knocking on my door, but at times I can tell when some are having it tough. That’s when I’ll pop round to their yard. But it needs to be someone who knows me, they don’t want some strange vicar poking his nose in.

That’s where the on-going relationship is vital. You never impose yourself, otherwise you’ll be told to go forth and multiply. I have to admit there are one or two trainers I haven’t spoken to apart from a good morning and goodbye, and that’s fine by me.

To what extent do you participate in the Newmarket scene?

My involvement with Racing Welfare, the British Racing School and the Astley Club brings me close to much of the community. I organise, along with a group of women known as the ‘Vic’s Chics’, the Christmas Carol Concert at Tattersalls, where we have a congregation of 500 every year.

Christianity is about caring for people and, therefore, has a place in racing

What do you enjoy most about living and working in Newmarket?

Being on the gallops early in the morning is the most fantastic experience. First lot on Warren Hill, with the sun rising, you can watch 500 or 600 racehorses going about their training. Try and find me a better sight in the world. You won’t.

Is there one issue above all others that racing needs to address urgently?

I never try to comment on racing politics because I don’t have the knowledge. Obviously prize-money rears its head, and also the way we treat people is very important. When we had the controversial business in Newmarket about whether Lord Derby should build all those houses on the Hatchfield estate in town, Peter Stanley, Lord Derby’s brother and chairman of the Astley Club, and I were about the only two people in Newmarket who didn’t have a view on the matter.

What is your view on gambling and how do you reconcile betting with religion?

Gambling is like so many other things, enjoyable. We all know it is part of our industry but it is like alcohol and like driving a car, both enjoyable but highly dangerous when out of control. It is not a question of the actual gambling, it’s the losing control – take a car at 90mph and it is a danger; excessive alcohol or betting beyond one’s means both cause anxiety and unhappiness.

Why aren’t more vicars involved in horseracing? After all, Irish priests come in their droves to Cheltenham!

It is partly because the Irish racing fraternity have a mentality of a gathered community, meaning they are more together in their churches and with their fellow priests than we are. We have about 220 chaplains who visit football clubs and other sports. We have had a chaplaincy team at Ascot for the last five years; there are two chaplains on duty at most meetings and as many as four at the Royal meeting.

A husband and wife were recently at Ascot when he collapsed with a heart attack and within minutes two chaplains were on hand to comfort the poor woman while her husband was fighting for his life. 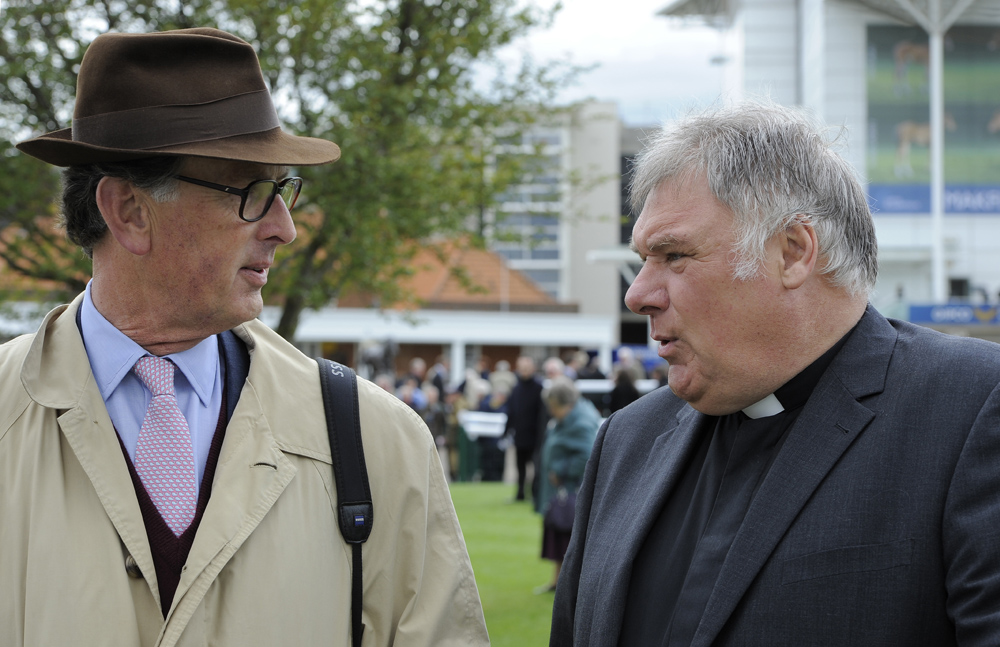 Chatting with trainer Roger Charlton at the Guineas meeting

Should the church play a bigger part in the industry?

My thoughts are that we have something to offer at our best, though at our worst the church is intolerable. However, at our best we do care, we have skills and experience, and once you get beyond the vicar image then people do want to engage. In the right circumstances and with the right clergy we could play a bigger part in racing.

In a poll commissioned by Racing Welfare over 70% who responded to the questionnaire said chaplaincy in racing should be extended across the country. Recently I recorded a short piece for Channel 4’s ‘4Thought’, which will be screened immediately after the Channel 4 news some time in July. I explain that religion is part of life, racing is part of life, and that Christianity is about caring for people and, therefore, has a place in racing.

Do other training centres have their own chaplains?

Recently I met the local clergy in Malton and Norton and talked to them about making monthly visits to yards to offer pastoral care, advice and support. We are in the process of contacting trainers in the area prepared to help us develop our plans. We have had an ongoing relationship with Lambourn but their clergy keeps changing.

Sometimes church people become very huddled together within their churches and part of my task is to try to inspire them to get involved in the racing community.

How does life in Newmarket compare with having a pastoral flock?

I had a pastoral flock for 22 years and now it is so freeing to be with people who have no pre-conceived ideas about God or vicars. I can relate to people just as they are. So I don’t have to worry about offending people because we haven’t chosen this hymn or that prayer. I don’t have to wrestle with church politics any more because I don’t have my own church.

Do you ever bet or get lots of tips?

I have had five bets in my 12 years at Newmarket and, would you believe, they have all won. You see, I take advice: there’s no point in being special adviser to the stars if you’re not going to take advantage of it!

Up Next
Reflecting on a rewarding term of office