Record number of racegoers in 2011
Stories

After more than 45 years with Doncaster Bloodstock Sales, Michael ‘Mouse’ White will lay down his gavel for the final time today at the conclusion of the one-day January Sale.

White joined the company straight from school at the age of 17 and over the years has become Partner, Director and Vice Chairman of the Yorkshire auction house which has its headquarters in Hawick in the Scottish Borders.

Famed for his quirky sales pitches, he was on the rostrum when Garde Champetre set a record for the highest-priced National Hunt horse ever to be sold at public auction, finally knocking him down for 530,000gns to Timmy Hyde on behalf of JP McManus.

Along with his DBS duties, White has also served as a racecourse commentator and as auctioneer for the Trinidad and Tobago Yearling Sales for eight years.

A tribute to him at the front of the DBS January Sale catalogue states: “Michael has been a stalwart of the DBS rotrum throughout this career, bringing his unique humour and experience to every sale whilst it is acknowledged that no auctioneer ever tried harder to illicit those extra bids that are so vital to every vendor.

“The Directors and staff of DBS will certainly miss Michael – a true one-off – and wish him a most enjoyable retirement whilst the shareholders of DBS, and more recently Goffs, would like to record their supreme appreciation to Michael for his hard work, dedication and professionalism over so many years.” 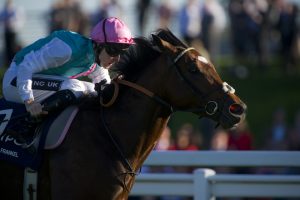 Up Next
Record number of racegoers in 2011