Liberty Counsel sprang a 50/1 shock in the Irish Grand National on Easter Monday when holding off the Willie Mullins-trained Away We Go by half a length to give Dot Love her first success in the race.

The ten-year-old daughter of Leading Counsel was ridden by five-pound claimer Ben Dalton, the winner of 14 races this season and 30 in total since he started riding under rules two years ago.

Liberty Counsel finished in mid-division when last seen in the Fulke Walwyn Kim Muir Chase at the Cheltenham Festival but she has been largely consistent throughout her six-year career, winning a point-to-point and over hurdles as well as her four steeplechase victories. Ironically, she started her career in a four-year-old point-to-point at Horse & Jockey in a race won by Seabass, who is currently second-favourite for Saturday’s Grand National at Aintree.

A grand-daughter of the mighty dual Arc winner Alleged on her sire’s side, the bottom half of Liberty Counsel’s pedigree is a little hazier. She is out of the part-bred mare My Free Mantel VII, whose sire is not registered in the General Stud Book.

Dot Love has sent out just seven winners this season but her Mullingar stable is also home to another classy mare, the eight-time winner Shadow Eile, who won the Grade 2 Mares’ Novice Hurdle Final at Fairyhouse last April and was fourth to Quevega in the OLBG Mares’ Hurdle at Cheltenham last month.

There was another leading female in the Fairyhouse winner’s enclosure on Monday following the Racing Post Champion Point-To-Point Flat Race which was won by Akorakor and Jane Mangan, whose dreams of riding a Cheltenham Festival winner were cruelly shattered when Oscar Delta spooked and unseated her on the run-in with the Christie’s Foxhunter at their mercy.

A touching postscript to the Fairyhouse victory is the donation of €200,000 by Akorakor’s owner Michael O’Leary to the fund to support JT McNamara, who suffered a serious spinal injury in a fall at the Cheltenham Festival.

The value of putting National Hunt mares in training was further illustrated on Monday by the Grade 2 Strawberry Hurdle victory of Dressedtothenines, who saw off five geldings, including runner-up Zaidpour, to win by three and a half lengths in the hands of champion jockey AP McCoy. 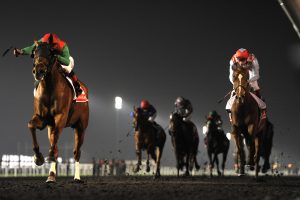 Up Next
Kingdom rules in Dubai