The Lyons speaks all right
Stories

Arrogate, the world’s best racehorse who has banked over £13 million during his incredible racing career, produced a shocking performance in the San Diego Handicap at Del Mar in California last night, trailing home fourth of five runners.

Khalid Abdullah’s superstar came into the race as the winner of his previous seven starts, with 2017 bringing stunning victories in the Pegasus World Cup and Dubai World Cup. He was sent off at the prohibitive price of 1-20 in the extended mile contest on dirt.

However regular jockey ‘Big Money’ Mike Smith never looked happy on the son of Unbridled’s Song, failing to pick up when asked having been settled at the back of the field. Arrogate beat only one horse, El Huerfano, whose rider, talented apprentice Evin Roman, lost his irons after stumbling leaving the stalls.

Mike said he was just flat. Physically he looks good but he just laid an egg

The Grade 2 contest was won by the John Sadler-trained Accelerate and Victor Espinoza, making every yard of the running to see off Donworth by eight and a half lengths.

Bob Baffert could offer little explanation for the lacklustre performance of Arrogate, who was conceding upwards of 8lb to his rivals, including inferior stable companion Cat Burglar, but was well clear on the ratings.

“Mike said he was just flat,” the trainer explained immediately after the race. “Physically he looks good but he just laid an egg.

“It’s nothing to do with the track. We thought this race would be good for him. I didn’t rev him up – maybe we were over-confident but he just ran flat.

“He just didn’t run his race. I hate to have him run like that. Silver Charm did the same thing for me. These things happen – that’s why I’ve got white hair!”

Baffert suggested the plan was still to run Arrogate in the $1 million Pacific Classic (Grade 1) at Del Mar on August 19. 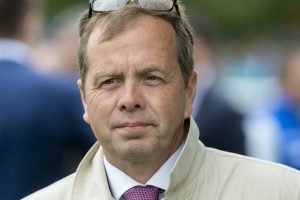 Up Next
The Lyons speaks all right