Klassical Dream defied a 487-day absence to return to his very best with an authoritative success in the Grade 1 Ladbrokes Champion Stayers Hurdle at Punchestown on Thursday.

Off the track since December 2019, the seven-year-old displayed that his zest was well and truly back as he took advantage of the fading Flooring Porter, who had been keen throughout, as French Dynamite was left in front.

Klassical Dream easily passed the leader under Patrick Mullins and once clear, he recorded a nine-length victory over stablemate James Du Berlais. There was a further three and a half lengths back to Ronald Pump in third.

Having displayed signs of exuberance in past races, the application of a hood by trainer Willie Mullins clearly worked wonders and helped to keep Klassical Dream settled having been involved in a false start prior to the race.

Patrick Mullins said: “He’s not simple, he does a lot of jumping around and can be temperamental, but on that performance he could be a cut above in the staying hurdle division.

“He came out of my hands at the third hurdle – which he did over two miles when he went flat out – but he didn’t put a foot wrong after that. He’s a Supreme Novices’ winner and always had the potential to put up a performance like that.

“I thought the false start wouldn’t be ideal, but he settled well with the hood on him at a very strong gallop. He’s fine once he gets going, but the first ten strides and when he walks up is when he gets excited.

“He’s a bit awkward, but he seems to have matured and going at a three-mile pace, he finds it more comfortable. He was meant to run in a beginners’ chase at Leopardstown at Christmas but got a setback, by the time he was ready to get going again it was too late to send him over fences.

“I imagine the French Champion Hurdle could be an option over those style of hurdles. Maybe he was a little out of his comfort zone in his first season out of novice company.”

There was a Grade 1 double for Willie Mullins as Energumene made up for missing last month’s Cheltenham Festival as he remained unbeaten over fences with a smooth success in the Ryanair Novice Chase.

By the time the seven-year-old crossed the line, he was 16 lengths in front of stablemate Janidil with Zarkareva 41 lengths further adrift in third. The Henry de Bromhead-trained Captain Guinness unseated Rachael Blackmore at the final fence.

Klassical Dream and Energumene were part of a four-timer for Mullins alongside Listed Close Brothers Mares Novice Hurdle scorer Gauloise and Capodanno, who justified favouritism to land the three-mile handicap hurdle. 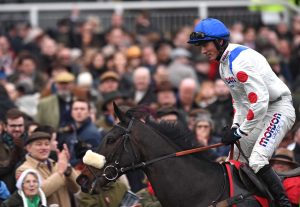 Up Next
Clan Des Obeaux rules in Irish Gold Cup