Sullivan back with Nicholls
Stories

It has been a breeze-up season unlike any other as sales houses have adapted to the ever-changing landscape caused by the coronavirus pandemic. On Friday, the curtain came down on the European season as the Tattersalls Ireland Goresbridge Sale was held in Newmarket.

Ireland’s only breeze-up auction had been moved to Park Paddocks due to travel restrictions in the nation and the decision to relocate was rewarded when a Kitten’s Joy filly topped proceedings at £220,000.

One of only two lots by the sire, who is best known for supplying the much-missed Roaring Lion and this year’s 2,000 Guineas hero Kameko, the filly had caught the eye when breezing on the Rowley Mile on Wednesday.

It was a fine result for Brendan Holland of Grove Stud, who had pinhooked the filly for $27,000 at last year’s Keeneland September Yearling Sale.

The delighted vendor said: “I bought her off my pals at Hunter Valley. I saw her when I went over last year and thankfully, they sold her to me. She has done really well, she is a lovely, lovely filly, she has loads of quality. She is very natural, and I’m delighted, it’s a great result.

“It is a great end to the season. Personally, we have done fine and most consignors are relieved it is all over and everyone is still in the game, I’d say. I look forward to relaxing and watching Goodwood next week, but we have got yearlings in and are starting to prep them.”

The Kitten’s Joy filly will now enter training with David Simcock, with jockey Jamie Spencer doing the bidding on the trainer’s behalf.

Friday proved to be a good day in the ring for former jump jockey Katie Walsh. Her Greenhills Farm operation sold a Night Of Thunder colt to Mark McStay of Avenue Bloodstock for £160,000.

Walsh said: “That was fantastic, he was always straightforward. He is from Michael Ryan of Al Eile Stud, they bred him and didn’t go to a yearling sale.

“He breezed really well. He has been with us since the middle of January. It is a fantastic result, it is great for the breeder, and great for Greenhills Farm as well. Hopefully he will go on now and be lucky for Mark McStay and his owners.”

McStay added: “The sire speaks for himself; he is doing fantastic things. This horse did an exceptional breeze, he vetted particularly well and was well presented by Katie.

“I am delighted to get a Night Of Thunder, they are only going to get more expensive as the year goes on. He is for an existing client, goes to Ireland and probably to John Oxx.”

Later in the session, Walsh’s Power colt went the way of Peter Nolan Bloodstock for £60,000. Out of Dusty Moon, the colt is a half-brother to five winners and is from the family of Spotlight and Zoffany.

Nolan secured the final and third lot on offer by Walsh’s Greenhills Farm, a Lope De Vega colt bought for £100,000.

He said: “They are for the same client who is new to me. They will head to Ireland. The colt looks as though he will be a two-year-old type, the others are more types to have a couple of backend runs and be prepared for a three-year-old career.” 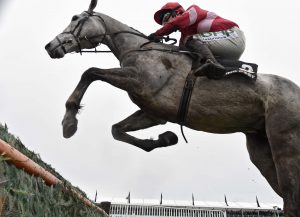 Up Next
Sullivan back with Nicholls