By The Owner Breeder staff 22 September 2014

Juddmonte Farms’ outstanding three-year-old Kingman has been retired from racing after it was revealed that he will not recover in time from his ongoing throat infection to be able to line up for major late-season races, including the Queen Elizabeth II Stakes on QIPCO British Champions Day.

The Invincible Spirit colt was beaten just once in a scintillating eight-start career which saw him romp to glory in four consecutive Group 1 contests this season. Having won a Newmarket maiden by six lengths in June 2013, Kingman was propelled straight into Group company for his next start in the Solario Stakes at Sandown, which he won in impressive fashion.

A chip to a fetlock joint and subsequent surgery ruled Kingman out of action for the remainder of his juvenile season but he returned this spring with another emphatic victory in the Greenham Stakes at Newbury. Having got the better of Night Of Thunder by four and a half lengths that day, the tables were turned on their following outing in the 2,000 Guineas when a split field saw Night Of Thunder land the spoils on the stands’ rail, just half a length clear of Kingman, who won the battle for supremacy on the far side. In behind them both that day in what has transpired to be a stellar line-up for the Newmarket Classic were subsequent dual Derby winner Australia, Prix Jean Prat winner Charm Spirit, St Leger winner Kingston Hill and Prix du Jockey-Club and Irish Champion Stakes hero The Grey Gatsby.

Classic glory came Kingman’s way three weeks later when he delivered a five-length trouncing to Shifting Power in the Irish 2,000 Guineas, the first of his four Group 1 victories, which included the St James’s Palace Stakes, the Sussex Stakes and the Prix Jacques le Marois. 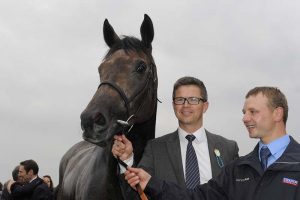 Up Next
Top-flight race doubles for Newmarket duo