Owned and bred by Prince Khalid Abdullah’s Juddmonte Farms, the son of Invincible Spirit was trained by John Gosden to win seven of his eight races, with his last four racecourse victories all coming in Group 1 company, including the Irish 2000 Guineas.

In the Cartier Horse of the Year category, Kingman triumphed over formidable opposition – last year’s winner Treve, who returned to her best with a breathtaking second Qatar Prix de l’Arc de Triomphe victory, dual Derby winner Australia and Noble Mission, whose third Group 1 win of the year came in the Champion Stakes at Ascot on QIPCO British Champions Day.
Kingman also won the Cartier Three-Year-Old Colt category ahead of Australia, The Grey Gatsby and Charm Spirit.

Also honoured on the night were Noble Mission, who won the Cartier Older Horse division, Taghrooda, the leading Three-Year-Old Filly, Cartier Sprinter of the Year Sole Power, and Leading Light, who won awards for Cartier Stayer.

Cartier’s top two-year-olds of 2014 were named as Gleneagles, who won four times for Aidan O’Brien, including the Group 1 National Stakes, and the speedy Tiggy Wiggy, winner of the Group 1 Cheveley Park Stakes among her five victories for champion trainer Richard Hannon.

The Cartier/Daily Telegraph Award of Merit was given to Sheikh Hamdan Al Maktoum, who has owned racehorses in Europe since 1980 and has enjoyed a terrific season in 2014 which included a 12th British Classic victory courtesy of Oaks winner Taghrooda.

Cartier’s racing consultant Harry Herbert said: “2014 was another exceptionally strong year for quality Flat racing in Europe and horses trained here did well the world over.

“Kingman is an excellent winner of the Cartier Horse Of The Year Award and overcame stiff opposition from Treve, Australia and Noble Mission. He was also successful in the Cartier Three-Year-Old Colt category.

“I wish to congratulate his connections and those of Noble Mission, Taghrooda, Sole Power, Leading Light, Gleneagles and Tiggy Wiggy for being Cartier Racing Award winners too.

“Sheikh Hamdan bin Rashid Al Maktoum has been rewarded this year for his long-term investment in bloodstock and I am thrilled the Cartier Jury gave him the Cartier/Daily Telegraph Award Of Merit.” 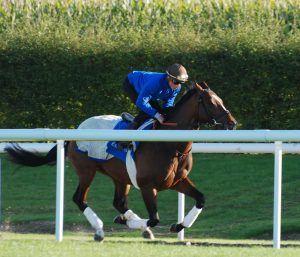 Up Next
New jockey signings for Godolphin