Her Majesty The Queen welcomed into Hall of Fame
Stories

By heading a single session of trading, the day’s highlight emulated his full-brother King Leonidas, who topped the 2018 renewal of Book 2 when selling for 750,000gns to Stroud Coleman Bloodstock. The siblings are out of the globe-trotting Reem, a Galileo mare whose performances for Mike de Kock included a Listed score in Dubai and a win in Australia.

John Gosden, the trainer of Kingman himself, took charge of King Leonidas on behalf of Sheikh Hamdan bin Mohammed al Maktoum and has saddled him to win two races, namely his first two starts in novice company at Newmarket. Still lightly raced and rated 103, he recently ran a good third at Newbury following a lengthy absence and looks like the type who could take higher order.

Gosden, bidding from the back stairs, made a strong play for this latest colt, offered by Hazelwood Bloodstock on behalf of breeder Essafinaat UK Ltd. However despite his best efforts, he was ultimately forced to give best to Simon Mockridge of Juddmonte Farms, which of course is home to Kingman himself.

The European arm of Juddmonte Farms are not usually major players at yearlings auctions but in a departure from tradition, they were noticeably active last week as the purchaser of 1,230,000gns worth of yearlings. The 525,000gns Kingman colt is their first purchase this week.

Adrian O’Brien of Hazelwood Bloodstock was understandably delighted with the result.

“The full-brother topped the sale three years ago and it is clearly a cross that works,” he said. “King Leonidas has had a few setbacks but is back on track now and he is clearly a very talented horse.

“I am very flattered that Juddmonte has bought a horse of his quality from our farm. I’m delighted for the breeder as well – it is just fantastic, we wish them the very best of luck.” 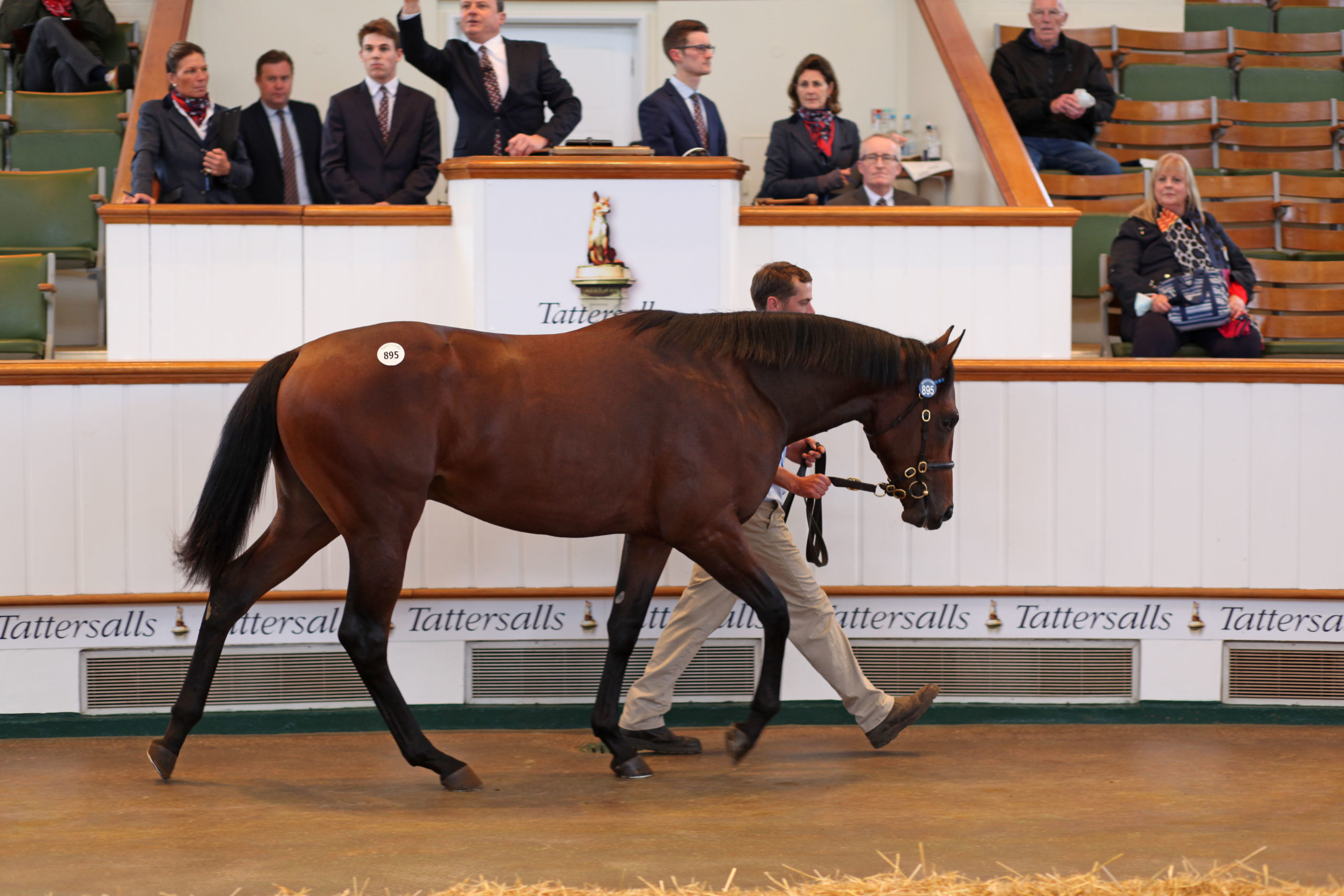 This Kingman colt topped the second day of Book 2 at 525,000gns. Photo – Tattersalls

An excellent update reaped major rewards in the case of Camas Park Stud’s No Nay Never colt out of Seatone. Already a half-brother to the stakes-placed Romanesque, the colt’s immediate family has flourished in recent weeks thanks to the exploits of his two-year-old half-sister Prosperous Voyage, runner-up in both the Group 2 May Hill Stakes and Group 1 Fillies’ Mile on her most recent starts for Ralph Beckett.

With an excellent physique to back up that update, the colt duly proved popular, selling for 450,000gns to Ross Doyle.

“He’s just a very nice horse, who stood out here,” said Doyle. “He’s a very good mover. We’ve had a few good ones by No Nay Never, the likes of [Oh So Sharp Stakes runner-up] Thankyou Next, and he’s obviously a very good sire.

Vendor Camas Park Stud bred the colt in partnership with Lynch Bages out of the winning Seatone. A Juddmonte-bred daughter of Mizzen Mast, she is a half-sister to Grade 1 winner Senure from the family of Xaar. 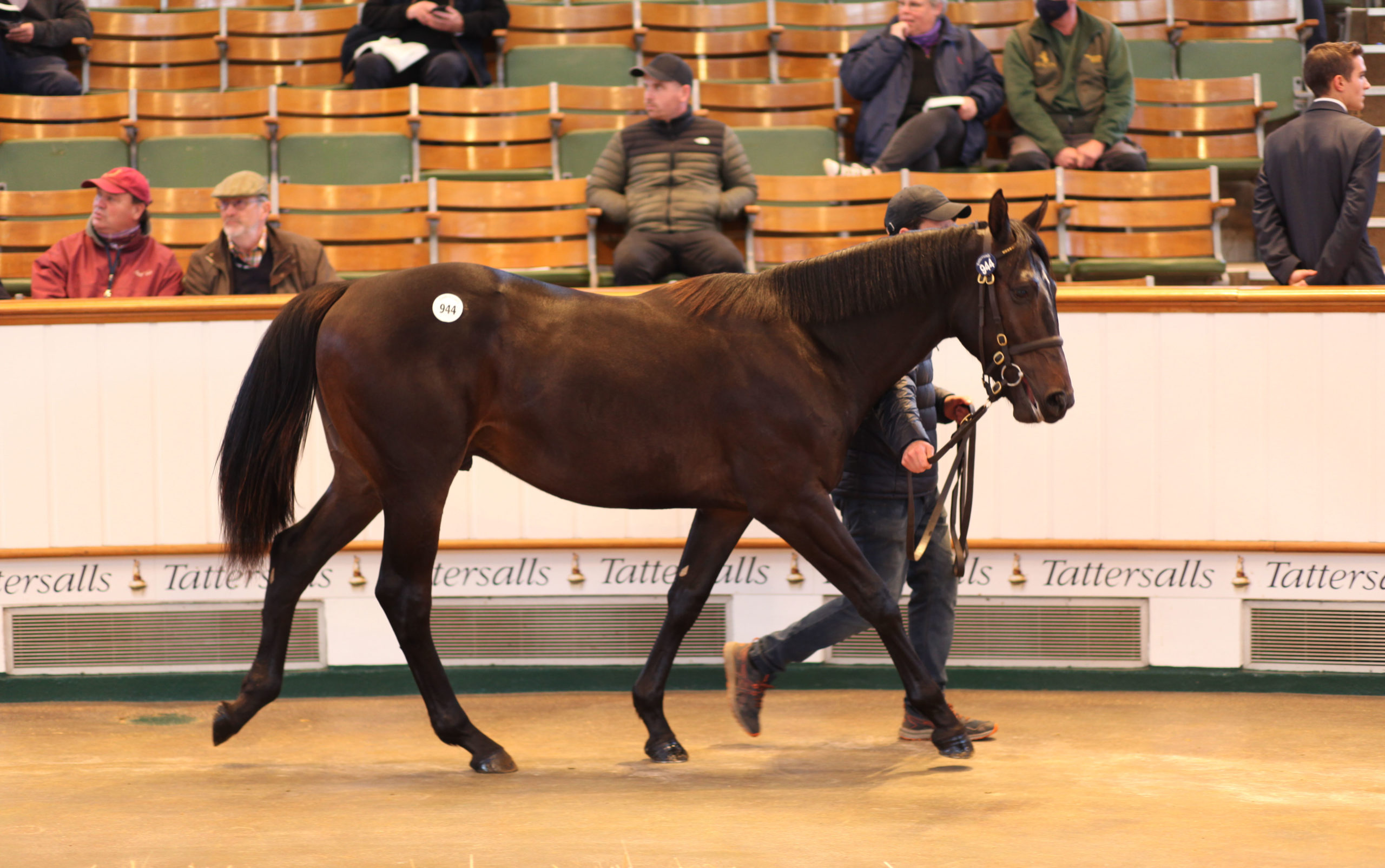 Meanwhile, American agent Ben McElroy was hopeful that lightning could strike twice after going to 340,000gns for a Kodiac filly from Tally-Ho Stud.

It was at the October Sale two years ago that McElroy came away with a Kodiac filly from the O’Callaghan family’s Tally-Ho Stud. She turned out to be none other than the Prix Morny and Commonwealth Cup winner Campanelle, and McElroy is hopeful that the latest acquisition can follow suit and also carry the Stonestreet Farm colours to distinction.

“I saw this filly two days ago and saw a real likeness to Campanelle,” said McElroy. “She has real scope for a Kodiac filly, she stands over a lot of ground and exudes a lot of class. She didn’t turn a hair in the back walking ring.

“We’ve had a lot of luck with the sire and I’m familiar with the half-sister Ventura Diamond [Bosra Sham Stakes winner] – the mare has produced a few highly rated horses.

“She’ll go back to the US and then they’ll think about training plans. Let’s hope the luck continues – and I think Barbara has already picked out a name for her!”

Bred by Sandra Russell, the filly is the fifth foal out of her dam, a Zamindar descendant of Prix Vermeille heroine Shemaka. 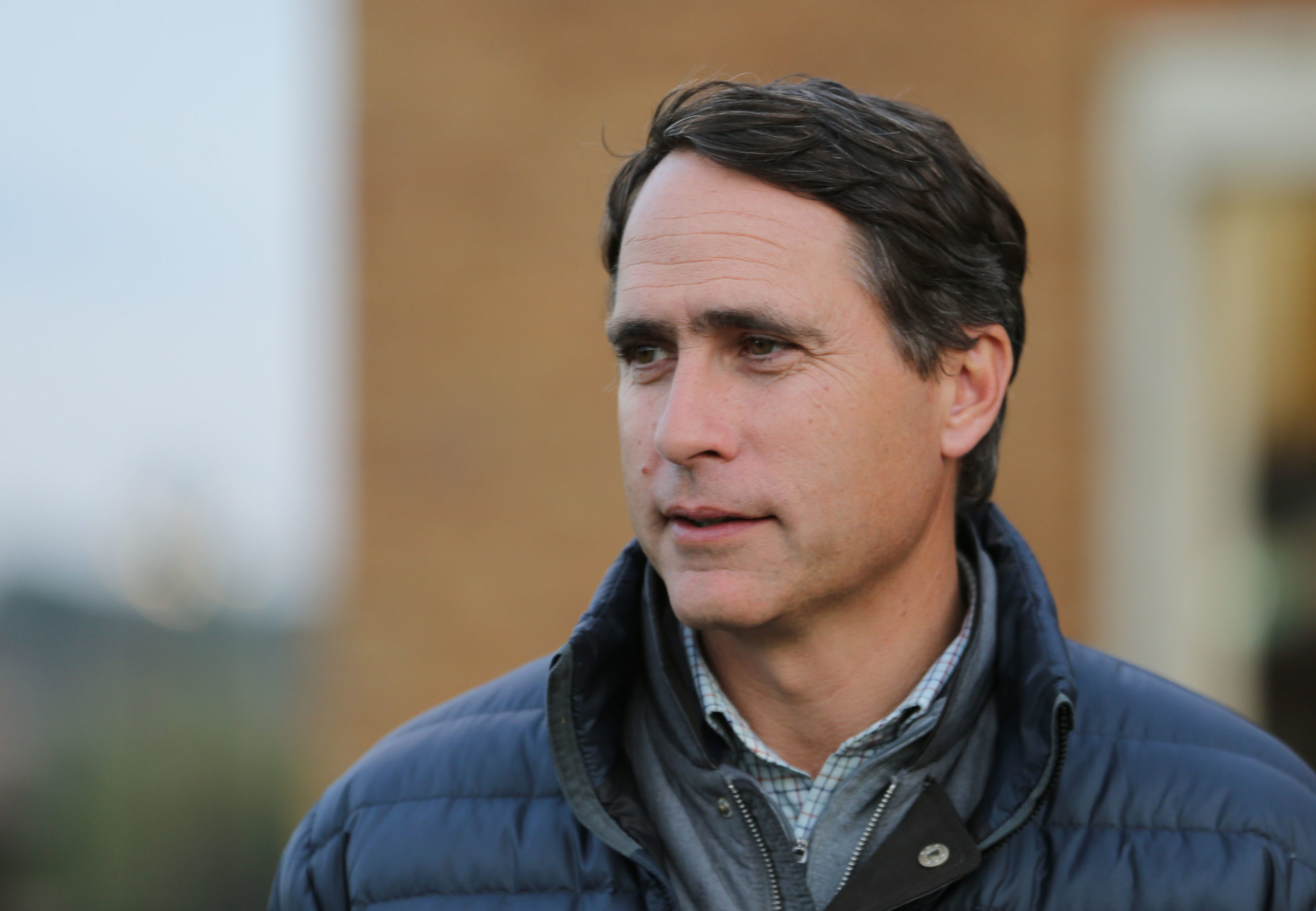 Overall, pinhookers also enjoyed a fair day, with 36 of 54 offered selling for some kind of profit on paper.

They were led by a son of the Tweenhills Farm and Stud reverse shuttler Zoustar who sold for 310,000gns to Demi O’Byrne, signing on behalf of Peter Brant’s White Birch Farm.

The youngster, a close relation to Grade 1 winner Gorella, had been pinhooked by his vendor Yeomanstown Stud for 110,000gns as a foal.

“He is a big, strong colt and I am delighted that Demi O’Byrne has bought him,” said Yeomanstown Stud’s David O’Callaghan. “I thought he was a very good foal out of an Exceed And Excel mare and with that speedy influence to back him up, I was happy to take a chance last year.”

He added: “It is as ever a selective market. But there are plenty of people here and everyone is working hard.”

A busy day for Stroud Coleman Bloodstock also consisted of the purchase of 12 yearlings worth 1,883,000gns. They included one of the day’s best-bred lots in a Gleneagles half-brother to this season’s Richmond Stakes winner Asymmetric, for whom Anthony Stroud paid 350,000gns as the session drew to a close.

Only the second foal out of his winning dam Swirral Edge, the colt was a homebred for vendor Jimmy Murphy of Redpender Stud. 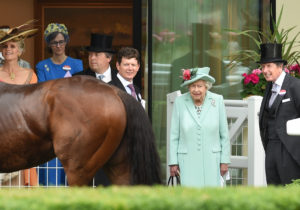 Up Next
Her Majesty The Queen welcomed into Hall of Fame