Animal Kingdom secured his future as an international superstar with a decisive victory in the $10 million Dubai World Cup on Saturday for his Australian-American partnership of Arrowfield Stud and Team Valor.

The details of his ownership are not the only cosmopolitan aspect of the Graham Motion-trained five-year-old. Bred in America by Team Valor, he is by the Brazilian-bred son of Candy Stripes, Leroidesanimaux, out of the German-bred Dalicia, a daughter of Acetenango.

Until his trip to the UAE, Animal Kingdom’s exploits had been restricted to his home country, where he won the Kentucky Derby by two and three-quarter lengths in 2011, having never previously raced on dirt, and finished runner-up in the Breeders’ Cup Mile last November on his return from injury following a nine-month lay-off. His travels looks set to continue, however, with Royal Ascot on his agenda this June before he commences stud duties at Arrowfield in Australia’s Hunter Valley.

Now with $8,387,500 in earnings to his name, Animal Kingdom became the ninth American-based winner of the Dubai World Cup and the first since its switch from the dirt of Nad Al Sheba to the Tapeta surface at Meydan.

The 2011 Melbourne Cup runner-up Red Cadeaux ran the race of his life to fill the same slot in the World Cup to the delight of his trainer Ed Dunlop. He too will continue his travels, with Hong Kong or Japan both potential next destinations. Planteur, who is trained next door to Red Cadeaux at Marco Botti’s brand new Prestige Place, ran home well for third, having finished in the same position in last year’s race.

Aidan O’Brien has not been a regular in Dubai but following last year’s trip, he returned in 2013 to claim two major prizes on World Cup night. His valiant six-year-old St Nicholas Abbey was given a superb ride by his son Joseph to take the scalp of Japanese super filly Gentildonna in the Dubai Sheema Classic, while earlier in the evening Lines Of Battle had secured the Group 2 UAE Derby under Ryan Moore.

Sheikh Mohammed, who clearly delights in his role of host to the world’s richest raceday, saw his Godolphin team strike twice. Yet another who could soon be known as a veteran, Cavalryman, now seven, proved he has plenty of fight left in him with a three-length victory in the Group 3 Dubai Gold Cup. Group 1 glory also went the sheikh’s way when Sajjhaa continued her great run at the carnival, securing her fourth consecutive victory at Meydan this year in the Dubai Duty Free.

Mike de Kock has also enjoyed considerable success at the Dubai International Racing Carnival over the years and he too enjoyed a double on World Cup night courtesy of Soft Falling Rain’s victory in the Godolphin Mile and Shea Shea’s strike in the Al Quoz Sprint. 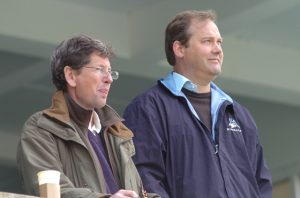 Up Next
High rollers