Homecoming Queen delivered a shock in the QIPCO 1,000 Guineas, making all to win by an emphatic nine lengths at 25/1 and give her trainer Aidan O’Brien his second Classic of the weekend following Camelot’s 2,000 Guineas victory on Saturday.

Aidan O’Brien and son Joseph, who rode Camelot to victory on Saturday

This was the second time O’Brien has pulled off such a feat, having landed both races in 2005 courtesy of Foostepsinthesand and Virginia Waters.

While Camelot was many people’s paddock pick 24 hours earlier, the diminutive Homecoming Queen, who was partnered by Ryan Moore, was easily overlooked. Trailing in the shadow of her stable-mate and race favourite Maybe, both in the paddock and in the betting, the three-parts sister to Dylan Thomas was unusually highly-tried for a Guineas starter, having run 13 times prior to lining up for the Classic.

Her first win had come in a nursery last September when rated 72 and on her eighth appearance on the racecourse. She followed up that success with a Listed victory in the Lanwades and Staffordstown Stud Stakes at the Curragh in October, while her most recent outing prior to her Classic win saw her hold off Fire Lily by a neck to land her first pattern victory in the Group 3 1,000 Guineas Trial at Leopardstown.

While she may not be physically the most prepossessing individual, Homecoming Queen owns a first-rate pedigree. She is the third Group 1 winner for her dam Lagrion, by Diesis, following the extraordinarily talented Dylan Thomas and unbeaten Queen’s Logic. Another half-sister, Remember When, was a close third to Snow Fairy and Meeznah in the 2010 Oaks and was subsequently promoted to second following Meeznah’s disqualification.

Lagrion has been particularly successful with Danehill and his sons, with Dylan Thomas being by the late super-sire and Remember When and Homecoming Queen by his sons Danehill Dancer and Holy Roman Emperor, with the latter notching a first Classic winner.

The 1,000 Guineas was late off on Sunday following a tragic stalls accident in which Gray Pearl, trained by Charlie Hills, was fatally injured. 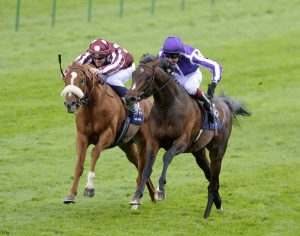 Up Next
Camelot claims 2,000 Guineas victory