Europe’s busiest horse gears up for raid on Autumn showpiece

Three-year-old colt Kidmenever has been making a striking impression on the continent since his move from the UK at the end of last year.

The son of Baltic King’s progression reach a high point on June 12 in the €69,000 Swiss Derby at Frauenfeld when trying a mile and a half for the first time. Under former Italian champion jockey Cristian Demuro, Kidmenever galloped to a comfortable two and a half-length victory over the Alain de Royer-Dupre-trained Black Sea.

Kidmenever was first picked up at the Goresbridge Sales by Lambourn-based trainer Stan Moore for what would turn out to be a bargain price of €10,000. After two starts at Salisbury and Lingfield, Moore decided to take his charge across to Deauville and won on what was to be his fifth and final start for the yard on Deauville’s polytrack, with none other than Christophe Soumillon on board.

He was claimed after that race by Xavier Nakkachdji for a sum of €34,500. The Chantilly-based trainer stepped him up to Listed level straight away which proved a step too far at that stage. He ran a further five times, which included a win and two seconds, before being sold once again in March to Augustin-Normand.

Since joining his current trainer Fabrice Vermeulen, Kidmenever’s form has hit a new level. Last time out in the Listed Prix Frederic de Lagrange at Vichy at the end of July, he finished a creditable second to Al Shaqab Racing’s smart performer Doha Dream, trained by Andre Fabre.

Two runs prior to the Swiss Derby success, he was a close third in the Group 2 Prix Greffulhe behind Robin Of Navan and Godolphin’s Cloth Of Stars, when he was supposedly the stable’s pacemaker for Apilobar, who finished behind him in fourth.

The Kidmenever story is far from over as Vermeulen has now entered him in the Prix de l’Arc de Triomphe at Chantilly on October 2.

Stan Moore, who continues to make profitable excursions across the Channel, has not been surprised by his former inmate’s recent upsurge.

The handler felt he would be more of a 1m1f type – Kidmenever’s unraced dam, Pepys Tillergirl, is a daughter of the smart miler Tillerman – but believes the style of French racing has helped him to stay 12 furlongs.

“He was always going to be a better three- and four-year-old than a two-year-old as he was a big horse,” reflected Moore.

“He’s been quite a busy horse, the man said on the racing channel the other day he’s the busiest horse in Europe! We’re all dreaming of getting a Group horse, so I didn’t think he’d be a Group horse, but he is there, anyway.” 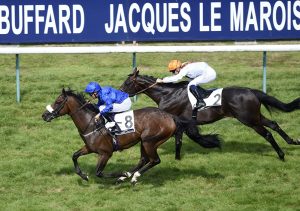 Up Next
Fahey strikes with Ribchester in Marois