Champion jockey Jim Crowley and Freddie Tylicki were both taken to the major trauma unit at St George’s Hospital in Tooting for further assessment.

A lengthy delay followed the incident, whereby Tylicki was airlifted from the racecourse while Crowley was taken by road ambulance, both were lifted onto spinal boards.

The two other jockeys involved in the incident – Steve Drowne [who was aboard Skara Mae] and Ted Durcan [Sovrano Dolce] – were found not to have incurred injuries after being checked over by doctors, but remained severely shaken.

German-born Tylicki was aboard the David Elsworth-trained Nellie Dean in the third race on the all-weather card, the Breeders Backing Racing EBF Maiden Fillies’ Stakes. The three-year-old looked to clip heels right in behind the leader and eventual winner Madame Butterfly, at halfway.

The fall had a knock-on effect bringing down three runners in behind, including Crowley and his mount Electrify who were closest of the four fallers to Nellie Dean.

With the subsequent mood around the track sombre, the decision was taken to abandon racing after consultation was made in the weighing room.

Barney Clifford, Director of Racing and Clerk of the Course at Kempton Park, said: “We gave racing every chance, there was no guarantee that the air ambulance could take off within the timescale. Having discussed with the jockeys and stewards the unanimous decision was a mark of respect for the two jockeys injured, Jim and Freddie, that we abandon racing.”

The unanimous decision was a mark of respect

He added: “The reality is that Flat or National Hunt Racing is a dangerous sport.

“I need to look back at the incident but I guess you don’t expect those things to happen on the Flat, and when they do clip heels it can be a concertina effect. I am just hoping and praying that Freddie and Jim are okay.”

Newmarket-based trainer Charlie Fellowes said on Twitter: “Two years ago @freddytylicki rode me my first ever winner. Thoughts and prayers are with him and Jim Crowley this evening.” 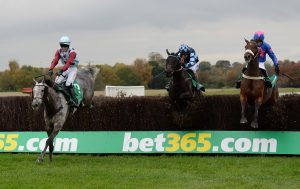 Up Next
Cavalier brave in Charlie Hall