The first woman to ride a Grade 1 jumps race in Britain, Lizzie Kelly, began the New Year with a bang after partnering Agrapart to victory in the Grade 2 Relkeel Hurdle at Cheltenham.

A day in history as ITV began its tenure as racing’s new terrestrial broadcaster, Kelly had already ridden a winner on the card in the Novices’ Hurdle aboard Coo Star Sivola.

She set out in second behind former World Hurdle winner Cole Harden as the rain continued to fall.

Agrapart made a mistake at the seventh and came under pressure briefly after losing a few positions. The six-year-old took the lead on the swing for home but was stalked by the strongly travelling L’Ami Serge and Daryl Jacob.

The latter, who was returning to hurdles after a stint chasing, took a narrow lead after the last. However, the Nick Williams-trained charge rallied gamely in the final 50 yards and got back up to win the two-and-a-half mile prize by a head.

For Kelly, this Grade 2 success was only her third of the season so far, but adds to her Feltham Novices’ Chase win just over a year ago on board Tea For Two.

“We’ve got good horses at home and we just needed a little bit of luck,” reflected Kelly. “He’s a legend. I knew today I would have a great shout, again we came in quietly quietly. The way he won in the Betfair I always thought he’d stay a bit further. It’s rained all day and I thought it was going to suit him.”

A son of Martaline, Agrapart seals the most high profile success of his career to date, and in terms of performances previously, is best remembered for running out an 11-length winner of the Betfair Hurdle.

“It was a brilliant ride. She’s very very strong in the finish there’s no question of that she’s won a lot of photos against very strong jockeys.”

Earlier in the afternoon, the Nicky Henderson-trained Whisper registered his second success over fences when getting the better of Clan Des Obeaux in the Grade 2 Dipper Novices’ Chase.

In what turned into a titanic duel, the nine-year-old got the better of the jumps at the last and had enough under Davy Russell to win by half-a-length. 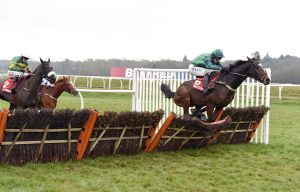 Up Next
Challow falls the way of Obeaux