Henrietta, Duchess of Bedford’s Bloomsbury Stud has been renamed Woburn Stud and has become the new base for Keith and Eileen Harte, who operate as Keith Harte Bloodstock.

The majority of Bloomsbury Stud’s bloodstock was sold at a dispersal during Tattersalls’ December Sale of 2010 but the Buckinghamshire farm had been in operation for 45 years, producing such high-class horses as Japan Cup winner Jupiter Island and Queen Mary Stakes heroine Pushy, both descendants of foundation mare Mrs Moss.

“We wanted to find a farm in a good location with enough scope to allow our business to grow and Woburn Stud suits our needs perfectly,” said Keith Harte. “It is a wonderful farm of over 300 acres, of which we will lease 140 acres initially, but which will allow us access to more land should we expand. There are 30 stables, a foaling yard, foaling boxes, six barns, a horse-walker, lunging ring and solarium; we will have all the facilities we require for our business.

“The stud has a record of producing very sound horses with good bone, with many Group and stakes winners. It is a farm that works so well due to the meticulous planning and management by the Duchess of Bedford.”

Born in Ireland, the Hartes moved to England in 2005 and have been based in Oxfordshire at Shutford Stud. Their business includes boarding mares, pinhooking and yearling consignment. Their four-lot consignment at October Book 1 last year sold for a total of 470,000gns, including a top price of 170,000gns for a New Approach colt.

Harte added: “A number of people have supported us over the last seven years and Mr Rootes and Mr Waller, the owners of Shutford Stud, have played a major part in helping us become established in the UK.” 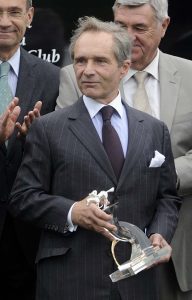 Up Next
Eighth Grand Prix for Fabre