After a seventh-straight win at Newbury last weekend, one of the most improved horses of the season Tobefair will be looking to make it eight-in-a-row next month on the grandest stage of them all, the Cheltenham Festival.

A son of Central Park, winner of the Italian Derby for Godolphin, the seven-year-old put up yet another gallant display in the hands of regular rider Trevor Whelan.

His toughest task to date, he nonetheless secured the Class 2 Cash Out Handicap Hurdle over three miles on Newbury’s Betfair Hurdle card.

The duo took up a position in midfield on the inner early on and into the straight for the last time took up the running coming to the second last. Under strong driving he was joined at the final flight by Morello Royale and briefly headed.

In the run to the line, the Down The Quay Club-owned charge wrestled back the advantage from Colin Tizzard’s mare to win by just over a length at the post.

Whelan, who has partnered the gelding on six of his seven wins, said: “He’s done it well in the end, he’s a good young prospect that grinds it out. Since then he’s come out of the race very well and has eaten up and showed the right signs.

“He won first time for the yard and has remained unbeaten since. They keep him fresh and he’s been in good form and obviously he’s been very well handicapped.”

Tobefair’s winning sequence began only a month after leaving Lucy Jones in May 2015 when he joined his Camarthen-based trainer Debbie Hamer.

Having showed very little during his time with Jones, the gelding struck gold on his first run for his new yard that June, running out a comfortable winner of a Class 5 handicap hurdle on fast ground at Worcester. He was given a rating of just 81 on the back of that effort.

He’s a good young prospect that grinds it out

Six wins later, Tobefair now finds himself on a mark of 134, fully 53lbs higher than for that first success.

On top of that those wins have now meant he has accrued just shy of £50,000 in prize money.

The next step for this improved performer is likely to be one of the three mile handicaps at the Cheltenham Festival in a months time, where he will be seeking an eighth-straight win.

“He’s nicely handicapped and has got plenty of experience under his belt. On Cheltenham ground that time of year if it’s good or firmer it will be fine and he will definitely go on it,” added Whelan. 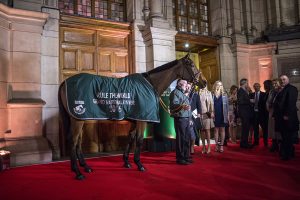 Up Next
Grand National weights announced