The request to set up this interview was met with the briefest of pauses before Richard Hannon replies: “Yes, Tuesday 9am is perfect. It should be a quiet day here.”

Come the appointed hour and Hannon offers a warm welcome before repeating his earlier pledge. “We’ll have plenty of time to talk about whatever you want. I’ll just get the entries and declarations out of the way first.” 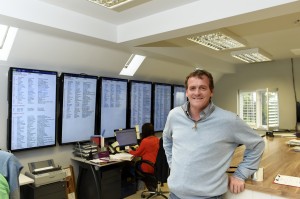 What follows is a veritable hive of activity. Countless individuals take part in an open-ended conversation, every thread of which passes through Hannon. His office personnel outline every horse’s rating and entry options later in the week, while Hannon simultaneously liaises with vets over the latest scopes and blood tests. With up to 30 entries to process each day, decisions are made within seconds.

No sooner is this done then Hannon takes to his 4×4 to oversee second lot, when he fields a battery of calls from owners and racing managers all wanting information. A sales company representative calls to ask about reserves on lots Hannon has sent to the horses-in-training sales. Another call triggers a discussion on whether a horse from another stable that is due to sell later that morning – with a £170,000 reserve – would make a suitable pacemaker for one of his own.

And for the duration of this bout of brainstorming, Hannon’s three-year-old son, Jack, is perched on his knee asking a barrage of questions of his own. If this is quiet, you would be left pretty breathless were the tempo to quicken.

The grandson of a trainer, Hannon describes his own son as a fourth-generation trainer in the making. That may come to pass but for now Jack is less interested in horses than the stash of Liquorice allsorts he knows are kept in the compartment under his father’s left arm.

If Jack was allowed to eat one sweet for every winner his father saddled, he’d be more than content. However, in the previous two years he’d have gorged himself to the extent that he’d have needed a doctor.

A look through the stats reveals that Hannon is slightly behind last year’s schedule, which was itself a little slower than the one preceding it. That was when he took over the licence from his father, also Richard, and galloped headlong to the trainers’ title.

Some people don’t mind spending quarter of a million on a racehorse. It’s neither here nor there

Of course, as with the “quiet” morning, these things are relative. It’s not the sort of downturn to raise eyebrows, much less sound the alarm. And that’s because there has been a subtle but perceptible ground-shift at Hannon’s combined premises of Herridge House and East Everleigh Stables, set a few miles apart in Wiltshire. It relates to the quality of inmates.

“We are getting a better class of animal now and some of them want a trip,” Hannon explains. “These horses take a little bit longer. People have probably noticed we hardly have any smash-and-grab two-year-olds that go out blistering away in March, April and May, after which they are finished.
We knew that before the season started.

“We have a lot of nice, seven-furlong two-year-olds for the backend,” he continues. “We used to have a choice of 20 horses for all those maiden auction races (for inexpensively-bought yearlings). Now we only have three or four that are qualified to run.”

This change of emphasis demonstrates two things. It reflects the spending power among new owners Hannon has recruited to the yard since he assumed the reins, and it underlines that the man who succeeded his father, undoubtedly the most prolific producer of winners among his peers, is determined to raise the bar still higher.

“You do need horses at every level but ultimately I think you’re there to train Group 1 winners,” he says. “However they come doesn’t bother me; it’s getting them that matters. And I think we have a better chance of getting them with the sort of horses we are training now. I don’t know if we’ve got one this year – but one is going to come along sooner or later.”

Those new owners have also helped to alleviate what was once a constant source of pressure.

“If we do get a big horse and the owner wants to sell, we can pass it on to someone internally to keep the horse here,” Hannon says.

“That’s a massive help. In the past we’d have to sell them and didn’t know whether we’d be keeping them. That used to cause us a lot of worry.

“And with the newer owners we have, you can tell them straight away if their horse is ordinary and they will send you another one. That’s a nice position to be in, because in the past we felt under pressure if a horse for a new owner wasn’t working out. We were always rushing; we’d be sending horses to anyone we could. We couldn’t be too picky.

“I’m not being snobbish or anything, but some people don’t mind spending quarter of a million on a racehorse. It’s neither here nor there to them. But when you see good horses at the races, nine times out of ten they are by good sires and/or out of Group-winning mares. As a trainer, you’re more likely to come across a good one when those bloodlines are available to you. It increases your chances.” 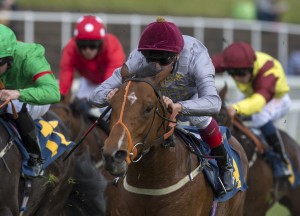 The logic is inescapable. And vindication arrives from the most unlikely source. Come the St Leger meeting in mid-September and Hannon had saddled fractionally more three-year-old winners than juvenile winners. That may not have happened in any of his father’s 43 years with a licence.

Nevertheless, a mildly defensive tone accompanies Hannon’s assessment of the campaign to date. “It’s been a good year,” he says. “You can’t moan when you’ve had 140 winners but it hasn’t been as good as when we had the stars in the last two seasons.

“I inherited Sky Lantern, Olympic Glory, Toronado – I mean, I had 28 Group winners in my first year, which was unbelievable. It just shows how many good horses we had, and on top of them we had some good two-year-olds, too, like Tiggy Wiggy and Gutaifan. But by God, you miss them when they’re not there.”

He continues: “We were also disappointed not to have had a winner at Royal Ascot. I’m sure people noticed but no-one said anything to me. It’s so important to have winners there but we didn’t have a star horse this year.

“I trained two Royal Ascot winners in my first year and two in my second. My first ever runner was Toronado and he won the Queen Anne, the first race on the first day. I’d only been in the racecourse ten minutes and the monkey was already off my back.”

Mention of the top-class horses Hannon inherited emphasises the way his father had refined his training regime to perfection. Yet Hannon has embarked on an expensive upgrade of facilities – particularly at Herridge, which is now the fulcrum of his operation. He craves an infrastructure befitting the quality of horse in his care.

In less than three years every gallop has been resurfaced. The stable’s livery has been redefined with new rugs, saddle cloths, mandatory staff jackets and horseboxes. The stable lads’ hostel, from where the smell of Indian cuisine wafts tantalisingly towards the new owners’ complex, has been completely overhauled.

The yards have also been turned over. There’s a new tack room, new laundry room, new silks room and rows of warm-water showers, all located around the atmospheric original yard with its old wooden beams. Hannon’s website, now a bespoke facility, has been upgraded to allow owners visual images of their horses.

It doesn’t stop there. Hannon is working on a new app, which will deliver a more personal experience to his owners. But the extent to which he is prepared to go for the slightest of edges is manifest in his efforts to buy a tract of woodland behind a sweeping gallop where horses warm up and warm down after daily exercise. He wanted to cut a four-furlong pathway through the trees so that horses could find tranquillity and respite from summer flies.

The horses are already more than adequately catered for, yet to Hannon, the hefty investment would have been warranted “just so that the horses could enjoy a bit of variety on the walk back after exercise.” But the plan ran aground: the woodland could not be disturbed.

Yet within this new-broom philosophy comes acknowledgement of the tried and trusted. The key personnel – the likes of vet Jamie O’Gorman, senior head lads Tony Gorman and Steve Knight, and racing secretary Kevin Mason – remain in place, and Richard Hannon snr is a reassuring backstop. His feed recipe for the daily mash hasn’t changed in nearly 40 years.

We give the horses carrots every day, which is why we have so many winners at evening meetings

“We also give the horses carrots every day,” quips Hannon, “which is why we have so many winners at evening meetings.”

For all Hannon’s desire to put his own stamp on proceedings, reference points to the past are embedded within him. As much becomes clear when he makes the short drive from Herridge to East Everleigh, with its maze of boxes squeezed into a plot from where Hannon’s grandfather, Harry, started it all back in 1959.

Hannon grew up at East Everleigh. The playground where he frolicked with his five brothers and sisters is still there. So is ‘Millionaires’ Row’, the small line of boxes opposite the old office which housed the 2,000 Guineas winners Don’t Forget Me and Tirol. There is a nostalgic look in Hannon’s eyes as he retraces familiar steps.

“The house was always full of people,” he reflects. “You’ve never seen so many people coming and going – and I mean every day. So lots of fond memories, but at the same time, our set-up has moved on a good bit. It had to. I find that owners these days like to be a lot more involved. You need a smart place to bring them to.”

Whatever the future holds, nobody can accuse Richard Hannon of resting on family laurels. 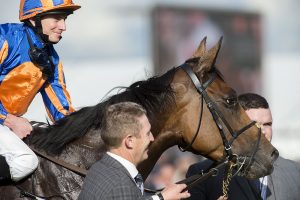 Up Next
Landmark first three in Arc for O'Brien