Turner the star of a burgeoning cast
Stories

Horses of the calibre of Kauto Star and Long Run don’t grow on trees, but Paul Nicholls must currently be hoping for a double case of lightning striking twice, following the arrival in his stable of exciting young French steeplechaser Kauto Stone, who had previously been trained by Jehan Bertran de Balanda.

There are two reasons for hoping that Kauto Stone might scale similar heights to the aforementioned Cheltenham Gold Cup heroes: Kauto Stone is a half-brother to Kauto Star and he won last season’s Grade 1 Prix Maurice Gillois Steeplechase at Auteuil, France’s premier four-year-old chase which had been won the previous year by Long Run.

Kauto Stone might only be a five-year-old, but the best French National Hunt horses seem to come to hand very quickly and he has already won three Graded jumps races, including the Grade 2 Prix Georges de Talhouet-Roy Hurdle as a three-year-old in 2009.

Like Kauto Star, he is the son of a former high-class French-trained Flat horse: Kauto Star’s sire Village Star, a son of the Mill Reef stallion Moulin, won the 1988 Grand Prix de Saint-Cloud when trained by Andre Fabre, while Kauto Stone’s sire With The Flow, an American-bred son of Irish River from the family of Lammtarra and Bosra Sham, won the Prix de Fontainebleau over 1600m as a three-year-old in 1998 for Criquette Head-Maarek’s stable, from which he was Group One-placed in the Prix Ganay three years later.

Any further success which Kauto Stone can achieve will be a big boost for Vauterhill Stud in Devon as With The Flow, who started his stud career in France in 2002 at Haras du Grand Chesnaie, is now on the roster there, which represents a potentially major coup for British National Hunt breeding.

Any such boost will doubtless be scrupulously logged by the TBA, whose Chief Executive Louise Kemble owns Kauto Stone in partnership with Patrick Atkinson. 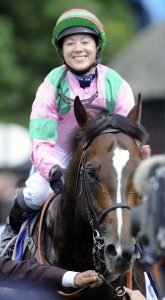 Up Next
Turner the star of a burgeoning cast