Juvenile crown once more to Ballydoyle

Dual Group 1-winning juvenile Churchill has been crowned 2016’s leading two-year-old in Europe and has been given an official rating of 122.

A son of Galileo and out of Listed and Group 2-placed mare Meow, Churchill won five of his six starts last campaign with that only defeat coming on debut at the Curragh.

An impressive win in the Chesham Stakes at Royal Ascot was followed by dominant displays in the Futurity Stakes and the Group 1 National Stakes at the Curragh, where he won by four lengths.

His final start came in traditionally the strongest two-year-old race of the season, the Dewhurst Stakes at Newmarket.

He strode out of the dip to beat his stablemate Lancaster Bomber comfortably by a length and a quarter.

Churchill becomes Aidan O’Brien’s ninth champion two-year-old in the last 18 years. Last year his colt Air Force Blue took the accolade with a rating of 124 after a breathtaking displaying at British racing’s headquarters.

However, his three-year-old season didn’t live up to expectations and he was subsequently retired to stud.

Mark Bird, Turf Club handicapper and delegate at the European two-year-old meeting, said: “A final rating of 122 sits just marginally below this century’s par rating for a European Champion two-year-old of 123.

“However, the progressive nature of his form allied to his obvious physical scope and impressive pedigree give rise to hope that his early career may be just the launch pad to greater success as a three-year-old.”

He added: “As his namesake once stated, ‘the price of greatness is responsibility’, so we hope and expect that Churchill will live up to his reputation in 2017”.

Ballydoyle are responsible for five of the top ten horses on the list, with Lancaster Bomber, Brave Anna, Caravaggio and Rhodedendron being the others.

The colt is currently red-hot favourite for the 2,000 Guineas where he is a general 6/4 shot with bookmakers. 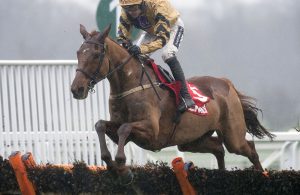 Up Next
Second chase win for Yorkhill