Our columnist suggests a different tack to Festival-going – he’s planning on staying put on the weakest day, Thursday, to recharge the batteries

For the first time since the Festival embraced a fourth day in 2005, Cheltenham now has what it feels is the optimum racing programme. Two more new races introduced this year means that each day will unfold around a seven-race card, if you include the charity race on the Thursday.

The last three-day jamboree embraced 20 races and so, with eight races subsequently added, nearly 30% of the programme didn’t exist seven years ago. A personal opinion is that quality has been impaired, although this is outweighed by the benefits of an extra day for the public and crowd restrictions that make the experience far less of a squeeze.

What isn’t quite so fathomable is why the two new races have been incorporated on Thursday, which is demonstrably weakest of the four. Those obliged to attend on all four days – and let’s face it, it’s a rank dirty job – find Thursday’s adrenaline rush is insufficient to withstand the first wave of tiredness. And while the Gold Cup is always a marvellous tonic, Friday dawns with the feeling that it will be good to get back home.

The time has therefore come to take a different tack, one commensurate with Cheltenham’s supposition that few racegoers now attend every day. After two days of hard sport, the plan is to stay in our rented house for roast lunch on Thursday and watch the action on television – work permitting, of course. Come Friday and we should be raring to go once more.

It is ten years since the foot and mouth outbreak scuppered the greatest racing show on earth, but nothing can surely derail four days of Bacchanalian excess in the Cotswolds.

We approach it with the equine hierarchy in a state of flux. For the second year running Binocular displeased even his most ardent supporters in his Sandown trial. The reigning champion looked anything but, and while he is entitled to start favourite on last year’s showing, the Champion Hurdle looks wide open. Hurricane Fly, Menorah, Oscar Whisky and Peddlers Cross, all newcomers to the timber blue riband, comprise as talented a crew as we have seen for years.

It is Imperial Commander’s misfortune to follow Kauto Star’s reign as the standout chaser. His Gold Cup triumph 12 months ago was under-appreciated as the media spun itself silly over the Denman/Kauto Star match-up. It is highly irregular that a Gold Cup favourite approaches the race without an outing in four months, but even a repeat triumph for Imperial Commander will not discharge headline writers from contemplating Kauto Star’s retirement.

These endless equine permutations are in stark contrast to the dominance of two trainers. At the time of writing, Paul Nicholls and Nicky Henderson have seven favourites for the 13 championship races. Interestingly, however, Nicholls’s horses cling to their status from Henderson’s thrusting brigade. If Big Buck’s, Master Minded and Poquelin are the here-and-now, Bobs Worth, Finian’s Rainbow, Long Run and Grandouet represent a future more golden than Henderson, now into his 33rd season, has ever known.

Despite lacking the drama of Henry Cecil’s Flat revival, Henderson’s second coming has been no less arresting. Yet while the raw talent at his disposal is formidable, his record in
the novice hurdles at Cheltenham is poor. Flown and River Ceiriog were rank outsiders when winning the Supreme Novices’ Hurdle and many will be startled to read that he has never won the Neptune Investment or the Albert Bartlett.
Curiously, however, Henderson’s record in the Triumph Hurdle is without peer. He has posted five triumphs to date, although somehow his subsequent triple Champion Hurdle winner See You Then was beaten in 1984. The anomaly is almost certainly explained by the fact that all but one of his Triumph Hurdle winners were campaigned on the Flat – as indeed were Flown and River Ceiriog. Henderson’s store-breds, by contrast, are works in progress at the novice hurdle stage.

Henderson and Nicholls have dominated the jumps season as Godolphin and Mike de Kock dominate the Dubai Carnival. But Cheltenham, like Dubai World Cup day, will not prove as subservient to their ambition.

Willie Mullins will have something to say about that and if the Nigel Twiston-Davies string recaptures its verve, who is to say he won’t embark on a spree to match his winning three of the last four races 12 months ago? There is, as they say, everything to play for. 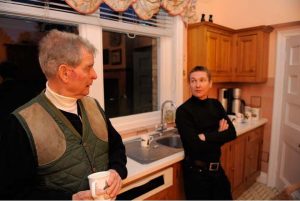 Up Next
Old friends, new beginning