Juddmonte has revealed a host of exciting mating plans for its quartet of stallions and its blue-blooded broodmare band, which has been bolstered with the addition of Fillies’ Mile heroine Quadrilateral for 2021.

The four-year-old became Frankel’s first Group 1-winning two-year-old when she held off Powerful Breeze to take the mile contest on Newmarket’s Rowley Mile back in 2019 and for her first cover, she will visit Dubawi.

Frankel will receive an exciting book of 24 Juddmonte mares this season including multiple Group 1 winners Ventura and Emulous, Bird Flown, the dam of last year’s Irish 2,000 Guineas scorer Siskin, and Nimble Thimble, herself the dam of Quadrilateral.

Group 2-winning duo Soffia and Modern Look also form part of the dual world champion’s book along with the Group 3 scorers Big Break, Dandhu and Visit. Flare Of Firelight, the dam of Group 2-winning two-year-old Threat, will also be covered by the son of Galileo.

The operation, which announced the sad news that Prince Khalid Abdullah had died at the age of 83, also revealed that Atone, a sister to Midday, Showcasing’s sister Tendu and Tiadargent, a sister to Restiadargent, also form part of Frankel’s book.

He will also be graced by the visits of Very Good News, a daughter of Hasili and the dam of Weekender, Logician’s half-sister Sleep Walk, and two half-sisters to Kingman in Panzanella and Present Tense.

Kingman, who sired three Group 1 winners in 2020 including Palace Pier, will cover 20 Juddmonte mares including the operation’s wondermare Enable, the winner of 11 Group 1s, and Frankel’s dam Kind.

The son of Invincible Spirit will also cover the Group 1 scorers Capla Temptress, Passage Of Time, Romantica, Samba Inc and Special Duty as well as the Group 2-winning pair Lucky Kristale, a half-sister to QIPCO 1,000 Guineas winner Love, and Riposte.

Having welcomed Expert Eye’s first foals in 2020, Juddmonte will send the son of Acclamation a number of its own mares including the Listed-winning and Group 1-placed Principal Role.

Other mares set to be covered by Expert Eye are Scottish Jig, Swiss Range, Kilo Alpha, Palmette, Strelka and Photographic.

Bated Breath’s book for 2021 includes Group 1 winner Proportional, Group 3 scorer Tested, and the Listed winners Alocasia and Rostova. He will also cover Meridiana, an unraced daughter of Galileo and Midday, and Sacred Shield, the dam of Juddmonte’s homebred Group 1 winner Viadera.
This season Oasis Dream will cover Bonne Idee, It’s A Given, Occurrence and Shared Account from the Juddmonte broodmare band.

The operation will also use a host of outside stallions for some of its mares with Group 1 winners African Rose, Announce, Midday and Promising Lead set to visit Dark Angel, Pinatubo, No Nay Never and Calyx respectively.

Goldika, a daughter of Goldikova, will also visit Dubawi while Proviso has had Coolmore’s new recruit Wootton Bassett selected for her cover. Timepiece will visit Night Of Thunder while Winsili will be covered by Golden Horn.

Enable’s dam Concentric will return to Nathaniel for the mating that produced the superstar while her half-sister Entitle will visit Sea The Stars. Frankel’s Group 2-winning daughter Obligate will be covered by Siyouni along with Headman’s dam Deliberate and Midday’s Listed-winning daughter Mori. 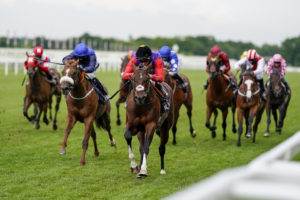