€170,000 Camelot colt stars on another strong day at Goffs
Stories

“It seems very strong. On the selling side, we’re getting good clearance rates. And buyers tell me it’s a struggle to buy”

A regally-related daughter of Frankel set the seal on an exceptional day of trade at the Goffs November Sale on Wednesday when selling for €550,000 to Juddmonte Farms.

The session-topper was bred by Heike Bischoff and Niko Lafrentz of Gestut Gorlsdorf out of their remarkable mare Sanwa, a Monsun sister to the mighty Group 1-winning trio Schiaparelli, Salve Regina and Samum. Sanwa has not let the family down either, since her winners include German champion Sea The Moon, the runaway German Derby winner who is now a successful sire at Lanwades Stud, the Listed-placed Sansiwa and exciting two-year-old Sea The Sky, the €820,000 BBAG September sale-topper of 2020 who made a smart winning debut earlier this month at Chantilly for Andre Fabre and Gestut Ammerland. 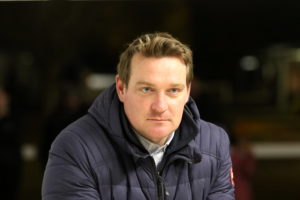 “It’s an outstanding pedigree – there are Group 1 horses throughout,” said Barry Mahon, general manager of Juddmonte Farms Ireland. “Obviously she’s by Frankel, who’s had a phenomenal year and looks like he’ll be champion sire this year. He’s been threatening to deliver for a few years and the stars aligned this year – it’s great to see it.

“And she’s a beautiful filly, very well prepared by Newtown Stud. She was one that Prince Khalid’s family were very keen to acquire.

Co-breeder Heike Bischoff was understandably all smiles following the sale.

“I’m absolutely overwhelmed, my knees were shaking,” she said. “On one side of course I’m sad but on the other I’m very happy. She’s gone to a lovely owner – I hope they have a lot of luck with her and she runs like a magic horse! And we’re very happy with the price – you can buy a house for that so you have to be happy!” 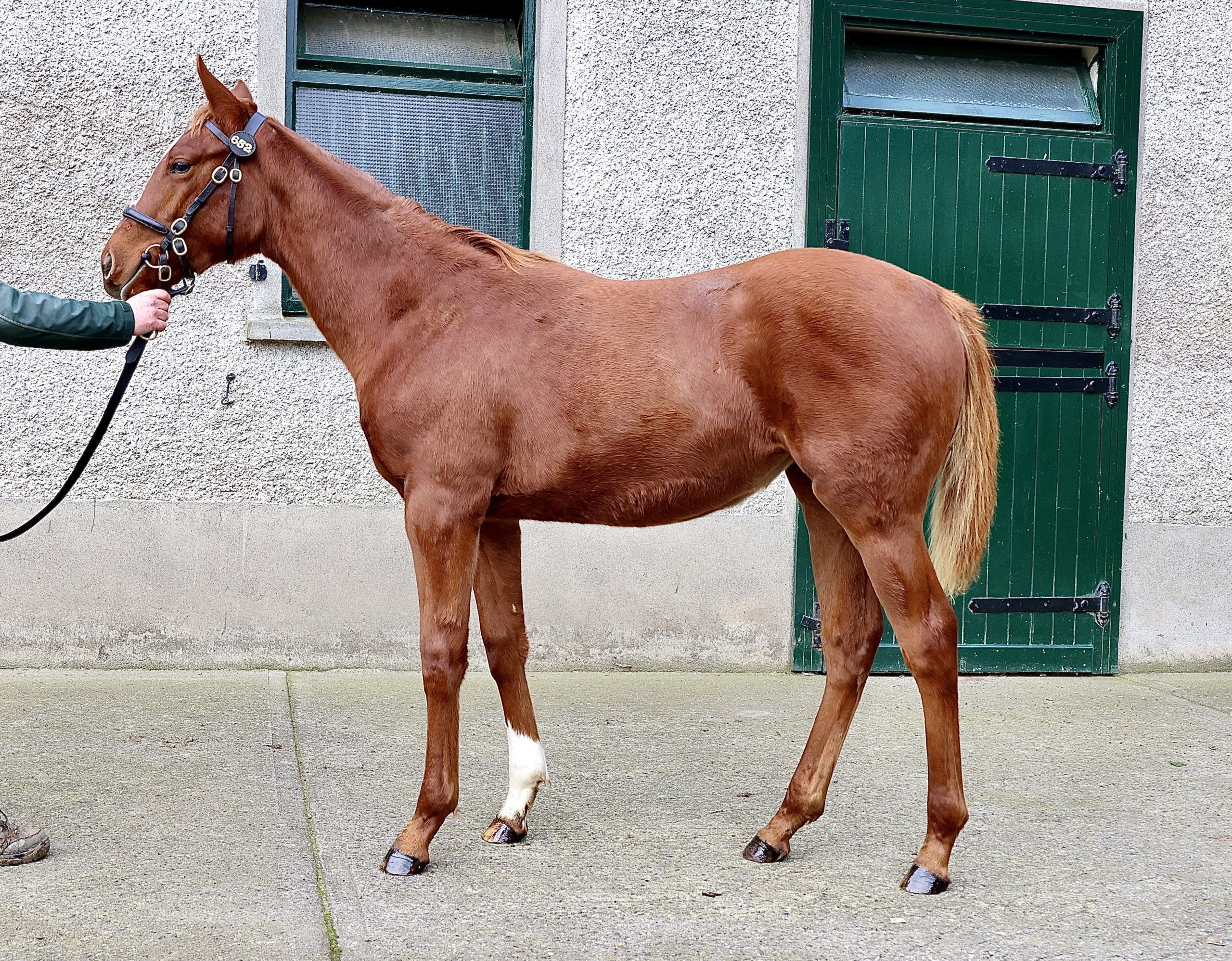 The filly is a half-sister to German Derby hero Sea The Moon. Photo – Goffs

A select group through the ring by Frankel also included a colt out of Noyelles for whom Eddie O’Leary of Lynn Lodge Stud paid €210,000.

Yet another extremely well-bred youngster as a half-brother to Group 3 winner Lily’s Angel, also second in the Group 1 Matron Stakes, and Listed scorer Zurigha, he was bred by Sir Nick and Lady Nugent out of the Docksider mare Noyelles, a clever €22,000 purchase by Alice Nugent at Arqana in December 2007.

“Frankels are hard to pinhook,” said O’Leary of the colt, sold by Neilstown Stud. “He’s a very nice horse by a very good sire and he’ll come back for resale.”

A good day for Neilstown Stud also featured the sale of a Lope De Vega half-sister to Group 3 winner Pantsonfire for €200,000 to Ballylinch Stud.

Next autumn was also on the mind of Rathbarry Stud’s Frannie Woods as he gave €270,000 for a Sea The Stars colt sold by Jockey Hall Stud on behalf of Sunderland Holding Inc. 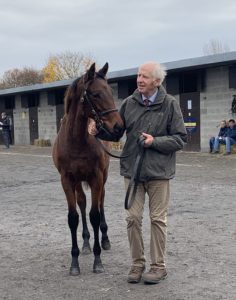 Mark Clarke pictured with the €270,000 Sea The Stars colt

Inbred 2×4 to Urban Sea, the colt is the first foal out of the unraced Newton’s Angel, a Dark Angel relation to Sea The Stars’ first good filly My Titania.

“He’s a lovely colt and he’s for resale next year,” said Woods, signing as Abbeylands Farm. “We’ve been trying to buy a Sea The Stars for a few years now and we’ve finally got one. I’d liked to have had him a little bit cheaper, of course, and the family needs to improve a bit as it’s a little light up top but if things fall into place he could be well bought for a big sale next year.

“The relatives all seem to be in the right place so we’ll just hope for a bit of luck. That’s what these good colts are costing now. The market seems strong and there’s nice stock out there so you just have to get stuck in if you want to play at that level. We didn’t have that many yearlings but we had a good year with the ones we pinhooked. It’s all about luck though.”

On a day when progeny of Sea The Stars returned an average of €139,286, another representative also hit the €270,000 mark in a half-brother to Group 1 winner Blond Me who sold to Timmy Hyde of Camas Park Stud.

In what was surely one of the most popular results of the sales season, the colt was sold by Mark and Elaine Clarke’s Wardstown Stud, a small family-run operation based in County Meath.

The Clarkes paid just 30,000gns for the colt’s dam Holda at the 2006 Tattersalls December Sale. From a fine Ballymacoll Stud family, the Docksider mare had won her only start, a Newmarket maiden, and in time would become the half-sister to Australian Group 1 winner Glass Harmonium in addition to Group 3 scorer Arab Spring. As for Holda, she has also done her bit for the family by producing Blond Me, whose six wins for Andrew Balding included the 2017 Group 1 E P Taylor Stakes and Group 2 Middleton Stakes. Holda is also granddam of the California Oaks heroine Consolida.

“We’re over the moon, absolutely delighted,” said Mark Clarke, who led up the horse himself. “It’s just wonderful.”

Elaine Clarke added: “We bought the mare as a three-year-old in Newmarket. She had won a good Newmarket maiden as a two-year-old and I thought surely that kind of ability would allow her to become a good broodmare. And she came from a wonderful Ballymacoll family.

“We were delighted to be able to have the opportunity to use Sea The Stars and then the foal was a fine, big, scopey horse. It means everything. Everyone works extremely hard at it – it’s not a job but a way of life. And to be able to share it with all the family here is wonderful.” 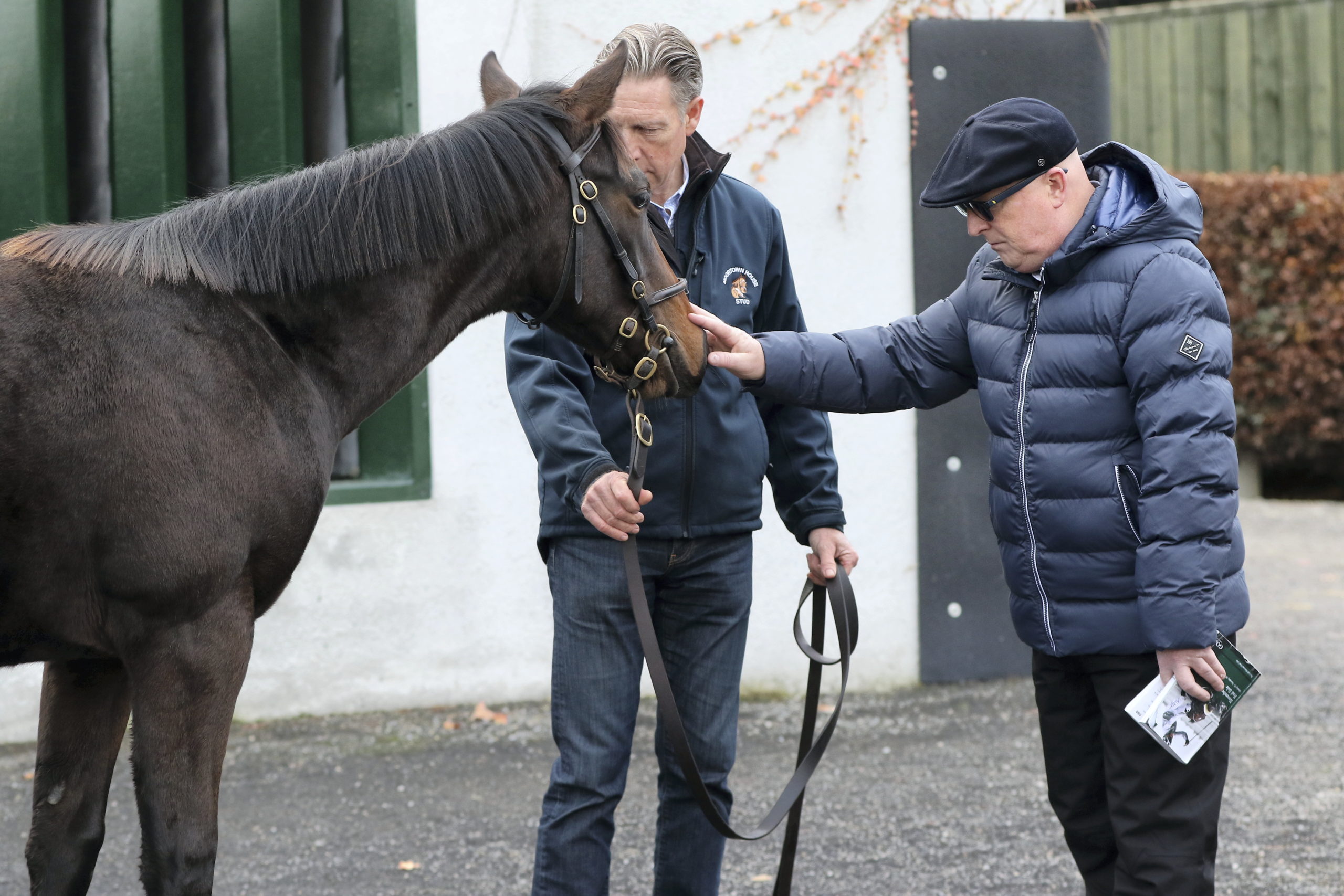 Pinhooker Philipp Stauffenberg also struck at €240,000 for a strong daughter of sire-of-the-moment Night Of Thunder sold by Oghill House Stud.

Stauffenberg had to outbid Matt Houldsworth for the filly, who was bred by Oghill House and Joseph Burke out of the 2017 Group 3 Prix Miesque heroine Sweety Dream.

Stauffenberg later came off second best at €210,000 to Michael Fitzpatrick of JC Bloodstock on a first-crop son of Darley’s Blue Point. Sold by Limekiln Stud, he is out of Wild Child, a Galileo daughter of the high-class Beauty Bright, and helped push Blue Point’s sale average to €68,800. 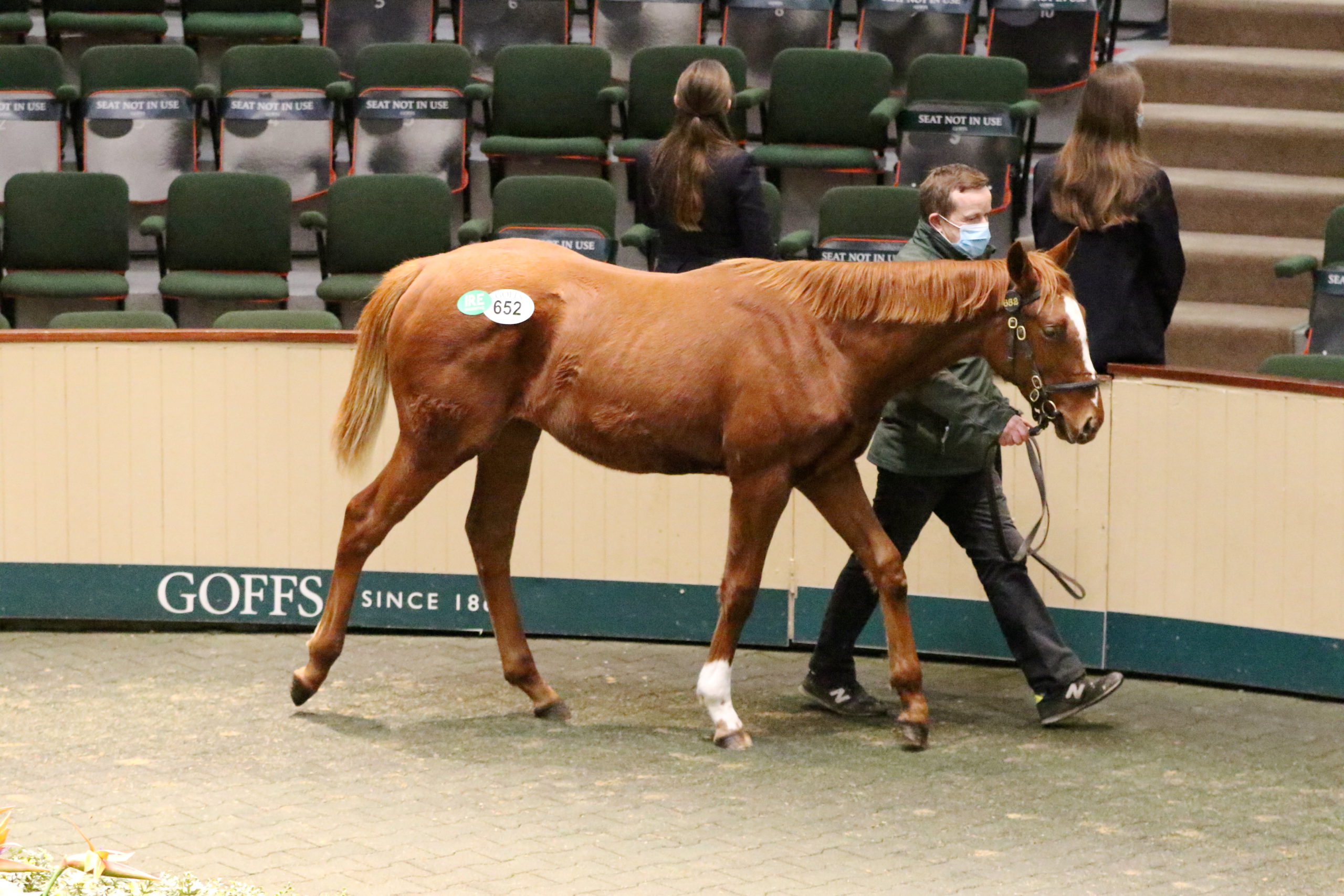 Similar to Night Of Thunder, New Bay was another ascendant son of Dubawi to enjoy a good commercial result in the shape of a colt out of the fast Hairy Rocket, for whom pinhookers WH Bloodstock paid €200,000.

“He’s for a partnership with Grove Stud,” said Mimi Wadham of WH Bloodstock. “We saw him four times and each show was fantastic.

“He’s by a sire we love in New Bay and I think one of the nicest foals by him that we’ve ever seen. He’s a really strong colt with a sharp active pedigree. He looks to have a fantastic temperament and so we’re thrilled to get him.”

Sold by The Castlebridge Consignment, the colt is a half-brother to this season’s Group 2-placed The Acropolis, one of the better first-crop flag-bearers for Churchill currently at Ballydoyle, and out of the Pivotal mare Hairy Rocket, who ran third in the 2013 Queen Mary Stakes at Royal Ascot.

Also coming in at €200,000 was the sole Kingman foal catalogued, a colt from Moyglare Stud Farm who is a half-brother to Group 3 winner Carla Bianca and Listed scorer Joailliere, herself dam of the talented Reve De Vol. They are out of Majestic Silver, an unraced Linamix half-sister to multiple Group 3 winner Profound Beauty from the noted Moyglare family of Irresistible Jewel and Princess Highway.

David Cox of Baroda Stud landed the colt with an eye towards an elite placement within his yearling draft of 2022.

“He’s a lovely colt from a really good family,” said David Cox. “He’s a great mover with a lot of quality and substance, but he’s also an April foal so I can see him doing really well over the winter. We’ll look forward to reselling him next year.”

He added: “It seems very strong. On the selling side, we’re getting good clearance rates. And buyers tell me it’s a struggle to buy.” 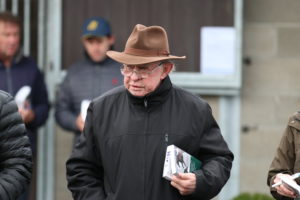 Up Next
€170,000 Camelot colt stars on another strong day at Goffs