This year’s edition of the Group 1 Juddmonte International at York will be worth £275,000 instead of its regular prize fund of £1 million.

It is another sign of the impact that the coronavirus pandemic has had on top-level racing in Britain, days after the Investec Derby was run for a value of £500,000 instead of £1.5 million.

The news came ahead of the Dante Stakes being run on the Knavesmire on Thursday and Teddy Grimthorpe, York’s Chairman, said: “We are delighted to be back racing at York, albeit initially behind closed doors.

“Despite challenging circumstances for all, we have tried to put our best foot forward with an incredibly exciting race programme and an investment in prize-money well above industry agreed levels.

“We are hugely appreciative and grateful for the wonderful support of our sponsors, annual badgeholders, partners and all who make York racecourse so special. While we look forward to the day we can welcome the return of spectators and supporters to York racecourse, in the meantime I hope people will follow and enjoy the sport on their televisions and mobile devices.”

Eyrefield Lodge Stud up for sale

Eyrefield Lodge Stud in Ireland, where the Loder family bred outstanding filly Pretty Polly, has been put on the market.

Currently owned by Sir Edmund Loder and his wife, Sue, the property dates back to 1760 and has 160 acres of limestone land on the Curragh. It has been reported that Loder and his wife are retiring from the sport.

Paddy Jordan, Managing Director of Jordan Town and Country Estate Agents which is overseeing the sale, said: “It’s really the end of an era – the family have been in the place for 120 years.

“They are among the last of the owner-breeders, breeding all those good horses like Marwell and Marling, going all the way back to Pretty Polly. It’s almost an endangered species, a fabulous property.”

Noonday Gun, the second foal out of multiple Group 1 heroine Sky Lantern, will make his debut in the 1m2f maiden at Pontefract today.

Offered at the Tattersalls October Yearling Sale in 2018 through Highclere Stud, Simon and Ben Keswick of Rockcliffe Stud went to 625,000gns to keep the son of Dubawi.

Noonday Gun’s opposition includes Luck On Sunday, the €2 million daughter of Galileo who will be looking to build on her fifth-placed effort on debut at Newcastle last month.

Racing also takes place on the Flat at Leicester today and over jumps at Newton Abbot while there are two meetings in Ireland at Killarney (jumps) and Roscommon (Flat). 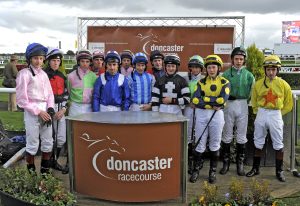 Up Next
Apprentice changes to take effect on July 15