The price set a new record for a point-to-point horse sold at public auction and it was easy to see why, given the manner in which Jonbon had obliterated his rivals in a maiden point-to-point at Dromahane on Sunday for trainer Ellmarie Holden.

It marked an excellent return on the €140,000 that Holden’s father Paul and Michael Shefflin had laid out for him at last year’s Tattersalls Ireland Derby Sale.

Speaking after Jonbon had gone through the ring, Paul Holden told Racing Post Bloodstock: “It’s great for the yard, Ellmarie puts a lot of effort into it.

“We took a punt on the horse when we bought him, he was an expensive store. On the day we bought him I suppose he was a cheap expensive horse – we didn’t think we’d get him. He’s got serious ability. Watch this space.”

Ellmarie, also speaking to Racing Post Bloodstock, added: “This wouldn’t be possible without the help of my parents and all the guys at home in the yard.

“It all just came naturally to him. He was ready to rock last year but we couldn’t run him. He’s a lovely horse and I wish them all the best with him.”

Having already made an excellent start to his career, all eyes will be on Jonbon when he runs under Rules to see if he can follow in the footsteps of his older brother who has won multiple Grade 1s for trainer Willie Mullins and owner Rich Ricci. 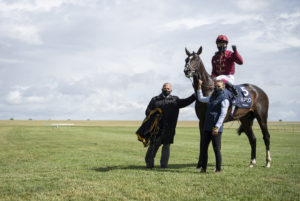 Up Next
Kameko debut fee at Tweenhills unveiled at £25,000