Up-and-coming consignor Libby Snell was well rewarded at the first day of the Goffs UK Spring Store Sale on Monday when her Kayf Tara gelding sold for £165,000 to bloodstock agent Tom Malone and trainer Paul Nicholls.

Snell pinhooks both Flat and National Hunt foals while working for trainer Ed Walker in Lambourn. Under the gelding’s second dam Gaye Memory can be found Gaye Future, the dam of this year’s Irish Grand National hero Freewheelin Dylan.

Out of the Environment Friend mare Gaye Sophie, the Kayf Tara gelding is a half-brother to the Grade 2-winning chaser Silver Hallmark and the Listed-winning hurdler Gayebury. He is a brother to Monbeg Chit Chat and the unraced four-year-old Burrow Seven.

Nicholls, speaking to the Racing Post, said: “I knew Silver Hallmark is a smart horse and he looks a real athlete. He’s for an existing owner in the yard, we knew he’d probably be top lot and he’s a nice racy sort to join our production line.

“Each year now we’ve been buying a dozen three-year-olds. Will Biddick has them for a year, then we mix them in with ours and run them in the autumn when they’re four.

“It’s something we’ve been doing for four years, the likes of McFabulous and Enrillo were the first ones I suppose. We’ve had around a dozen individual bumper winners go novice hurdling now and have another lot of four-year-olds for next year.”

Snell, also speaking to the publication, added: “He was bred by Scarlett Knipe, she’s from the next-door stud farm back home. She took him to the sales at Newmarket as a foal, she didn’t sell him so Dad [George Snell] and I said we’d go and look at him.

“We loved him and bought him privately, and it was the day before Silver Hallmark won his point-to-point. We knew there was a lot of excitement about him but we weren’t expecting that much. I’d say a lot of it is just luck, but he has become a beautiful horse.

“Dad kind of does all the hard work and the prep during the week, and I go back at the weekends to check up and boss him around! He gets all the credit.”

Malone and Nicholls had earlier signed for Brown Island Stables’ Mount Nelson gelding, who is a half-brother to Peterborough Chase scorer Charbel and the promising Ajero, at £150,000.

He told the Racing Post: “Win, lose or draw we wanted him, so we bought him and we’ll get him sold when we go home. [Kim Bailey] had the two best in the pedigree, Charbel and Ajero, one’s a 140-plus horse and the other’s a 160, so the pedigree speaks for itself.

“One was by Iffraaj and the other Red Jazz, so it’s a pedigree that can get you a good horse regardless of what you may think of the sire – that was a way of looking at it anyway. He wasn’t a big, strong, robust horse but he was all action, he just floated. An easy one to catch your eye.” 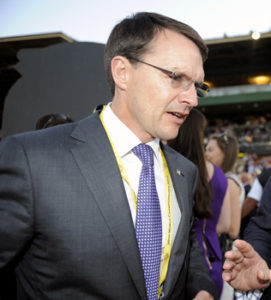 Up Next
Guineas glory for Ballydoyle with impressive St Mark's Basilica