Joy And Fun for Doyle in Hong Kong

In recent years, race-riding in Hong Kong has been dominated by South African and Australian jockeys. Even so, the two riders from the British Isles who have been there this season (Brett Doyle and Neil Callan) have been holding their own.

Doyle, though, has been in the Far East more or less full-time for several years now. In fact, it is easy to forget that Doyle, 39, is one of the best of the current generation of English jockeys, as he has spent only a minority of his time in the UK since riding Sayyedati to win the Sussex Stakes at Goodwood for his former boss Clive Brittain in 1995.

Last weekend saw Doyle ride his biggest winner for many years, guiding Joy And Fun to victory in the Group 1 Chairman’s Sprint Prize over 1200m at Sha Tin. An NZ-bred son of the Danehill stallion Cullen, Joy And Fun is well established as one of Hong Kong’s best sprinters, but even so this was a landmark victory for the nine-year-old gelding. In the past, he had generally been the bridesmaid rather than the bride in the really big races, including when second to the Irish-bred Dubawi gelding Lucky Nine (who had initially raced in Ireland as Luck Or Design) in the Hong Kong Sprint at Sha Tin’s International Meeting in December. Last Sunday, though, saw the tables turned, with Lucky Nine chasing Joy And Fun home as the latter landed his first Group 1 victory.

Ironically, last Sunday’s meeting at Sha Tin is likely to have been Doyle’s final day riding in Hong Kong during the current season, as he has just taken up a post in the Gulf. He is likely, however, to be reunited with Joy And Fun in the Al Quoz Sprint at Meydan on Dubai World Cup night. The pair landed this race in 2010 and should be very competitive again in it this year – although if the Australian superstar Black Caviar is in the field, it is hard to see her being beaten.

Joy And Fun is trained by Derek Cruz, brother of the former champion jockey Tony who enjoyed so much success in Europe during the late ’80s, most obviously aboard the mighty Triptych. Both Cruz brothers are now successful trainers at Sha Tin, with Tony’s past stars having included the former champion sprinter Silent Witness, who will make a guest appearance at Caulfield on Saturday when he leads Black Caviar out on to the track, and his current team being headed by the reigning Hong Kong Cup winner California Memory (who started off in France as Portus Blendium). 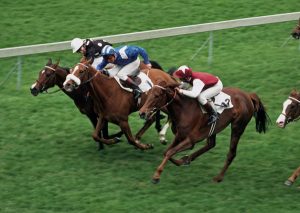 Up Next
Oh So Sharp still influencing the 'Classics'