Of course she can
Stories

Patience reaps its rewards, never more so than in the case of Robert Havlin. For many years a caterpillar, he has emerged from his chrysalis to take flight. The jockey who once seemed permanently grounded is now stretching his wings, enjoying the vista from on high. It is a sight many thought would never come his way.

It is all the more rewarding for the fact Havlin, 42, is approaching the career veteran stage. Most of the journeyman apprentices he rode with two decades ago have been and gone. Youth’s impetuousness has given way to measured appreciation. Life is thus all the sweeter for one able to appreciate it in a way that once would have been beyond him.

The Scotsman has, in fact, been posting decent numbers for some time now. Last year was his best yet, with 73 winners from more than 500 rides. But his metamorphosis came into sharper focus recently at Royal Ascot, where he rode his first winner aboard Ardad, trained by John Gosden, in the Windsor Castle Stakes. It took him a few days to realise the significance of the achievement.

“Everyone in the yard was buzzing and I really felt that,” he says. “Obviously I felt good myself; I hadn’t ridden one before and I was aware of it, but seeing all those happy faces made me realise how special it was.”

Havlin enjoyed it all the more for having friends around him with which to share the moment. Companionship is something he has always savoured, although in truth, it was nearly his undoing in his early years.

To appreciate this, you have to rewind the clock 20 years, when Havlin was the stable apprentice at Manton. Peter Chapple-Hyam’s successful tenure was coming to an end and there was discord among the staff that the best of patron Robert Sangster’s racehorses were being sold off for profit. In these circumstances, to have a pub within the grounds of Manton’s sprawling acres was well-intentioned but misguided. Havlin well remembers the legacy inherited by Gosden in late 1999, when he succeeded Chapple-Hyam at the storied estate.

“Some of the lads would be drunk when they came into work on a Monday morning and they were already on their last warning,” he recalls. “They knew John’s good side so they’d go into his office and say: ‘Guv’nor, I think I have a drink problem.’ And John would say: ‘OK mate, well done for admitting it. Now let’s get you some counselling to help you back on your feet.’”

I used to be the first one in the pub, so I always got on with the lads. I was enjoying life too much

Havlin maintains he was never that bad. “I think there were times when John wanted to say to me I needed some help, but I got a bit older and wiser and helped myself,” he relates. “I used to be the first one in the pub, so I always got on with the lads. I was enjoying life too much, I think.”

Gosden’s recollections are broadly similar, although he remembers their initial encounter with particular clarity. “The first time I met him, his BMW was lying on its side in a hedge,” Gosden relates with a chuckle. “He’d climbed out of the passenger side and I remember telling him it was best to leave the car where it was at that time of the night. Like a lot of young people, he had his wild side. There’s nothing wrong with that.”

Nevertheless, nights of revelry served to make Havlin lose focus at a critical stage in his apprenticeship. He started promisingly enough, riding 32 winners in 1996 and 15 in each of the next two years, but quickly tapered away.

“I never actually rode out my claim,” he reflects. “I was four winners away from it, but by then I’d lost a bit of interest. I went through those wild years and didn’t really get my head around it for a while afterwards.”

Havlin loved Manton. He relished the embrace of Chapple-Hyam’s gregarious regime. He felt part of a family he never really had; his parents divorced before he was three years old. He also cherished the paternal influence Gosden exerted on his rudderless life, so when Gosden announced he was moving to Newmarket in 2006, Havlin sensed the ground shifting under his feet.

“The boss told me he wasn’t in a position to offer me a job, but that if I ever moved to Newmarket, I should give him a call,” Havlin reflects.
After some soul-searching, he decided to up sticks. He was somewhat suspicious of change, partly because he felt comfortable in the Manton community, but Gosden was true to his word. The change made Havlin realise opportunity was slipping away.

“The thing about the boss is that he really cares about his staff,” Havlin says. “I’d seen that at Manton; sometimes I used to think that he cared too much, if anything. But when someone puts their neck on the line for you, you don’t want to let them down.

“I really felt that strongly,” he continues. “I was on the mat a few times in my younger days and I’ve had my bollockings on the way back from the races. The boss would say the famous phrase: ‘Be in my office at 12 o’clock,’ but that was a good thing. You realised he cared about you off the track as well as on it.” 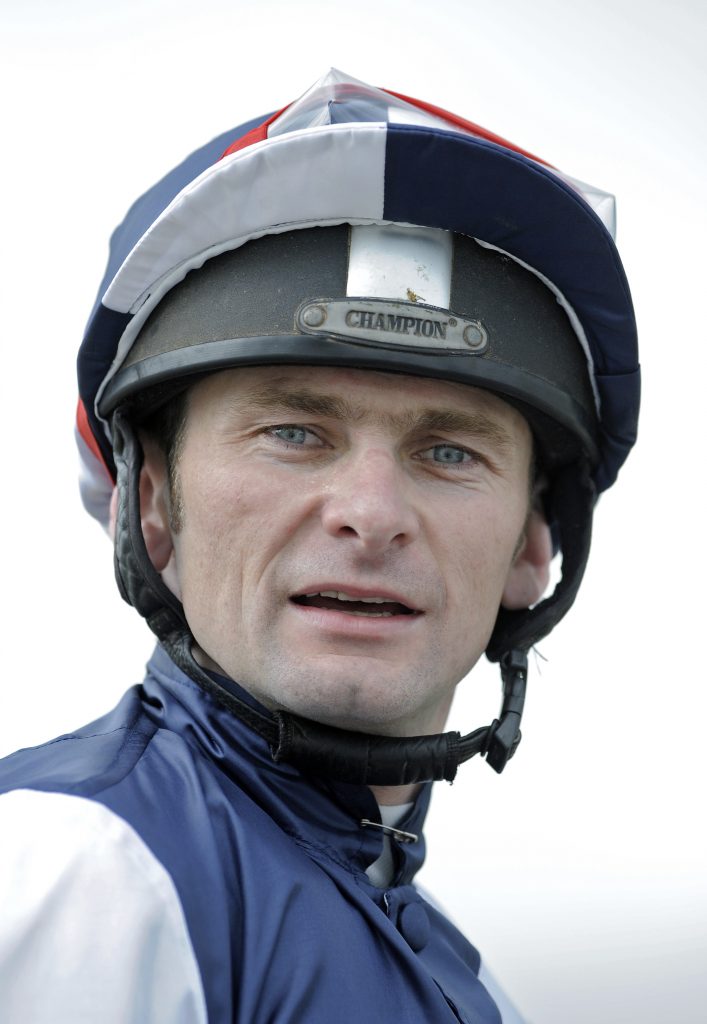 Robert Havlin: hard work on the gallops has been rewarded with quality rides on the racecourse

This, of course, was a two-way street. In return for his patience, Gosden received the counsel of a fine judge, a rider with the rare ability to relax headstrong horses, not to mention those difficult, cussed, troubled thoroughbreds who have no prospect of fulfilling their potential without learning to cooperate.

Havlin acquired this valuable skillset in his mid-teens, when his mother dragged him out of bed early on Saturday mornings and took him to John Wilson’s yard at Cree Lodge, in the shadow of Ayr racecourse.

“It was funny, really,” Havlin says. “My father also wanted to be a jockey but he never told me about it. He spent a year with Dave Thom but then went back to Scotland because he was homesick.”

Havlin joined Wilson full-time on leaving school, by which time he’d already experienced things other wannabe jockeys would rarely encounter. Together with a few kids from his council estate, he spent evenings after school working for the local horse dealer, Alex White.

“He had coloured ponies arriving from Ireland twice a week and we would break them in one day,” he says. “I had a good few slaps from Alex. All the kids thought I was crazy back then but it probably stood me in good stead.”

Whatever lessons he learnt, Havlin has since morphed into a pivotal member of Gosden’s staff. He is instrumental in taking much of Clarehaven’s nascent talent forward towards their races. He rode Golden Horn in his work ahead of last year’s Dante and told Frankie Dettori he was aboard the wrong horse (Jack Hobbs) in that race. Ask him for the best he had ridden and he tempers his reply in nominating Kingman. “It’s probably because I rode him every day,” he says. “He was a phenomenal horse; he had everything.”

Havlin always bestrode top-class horses at home but he is now riding a better calibre of horse on the racecourse. He has long since shed the tag of capable deputy, as evidenced by a Royal Ascot triumph that jostles for CV space with his winning rides in the Derby Italiano and Oaks d’Italia, not to mention a smattering of Pattern-race triumphs in Britain.

Yet he remains at heart a team player, one happy to defer to Dettori on the big days even if he might have done most of the legwork. He admits there have been times when others have encouraged him to loosen his ties with Gosden in the quest for greater personal recognition. The prospect has never appealed.

“I like being part of something,” he says. “There’s not a lot of loyalty in this game and you can’t expect a different person to be loyal to you every year. You see kids today going to stables and not getting rides, then hopping over to someone else, and again the next year. How are they going to cope when they have a bad year?

The boss really cares about his staff. Sometimes I used to think he cared too much, if anything

“Sometimes you might wonder why you’re not jocked up on some of John’s horses and then, when they don’t run well, you think: ‘I’m glad I wasn’t on those.’ But that’s John, trying to protect you. When you’re younger you don’t see it that way. It’s only when you sit back and look at the big picture that you realise it.

“Loyalty is something you build over years and years, and I just love where I am now,” he continues. “As long as it keeps going, it’s more than enough for me. The top jockeys go to big meetings like Royal Ascot under a lot of pressure, whereas I don’t. Ardad was a 20-1 chance. I’d love to win a Classic one day – and you never know, that might just happen, but the main things is that I’m working for a great boss.”

He is also in a great place in his private life. Towards the end of the year he will point himself down a straight course with pews either side of him instead of running rails. He plans to marry Kelly, his partner of seven years, and with whom he has two daughters: India, aged 4, and Lucia, 2.

For Havlin, the emotional journey is almost complete. All that remains is for him to savour the remainder of a professional career rendered all the more rewarding for it coming to him so late in life. His is a refreshing story within the debris of shattered dreams so prevalent among those for whom success came too soon. 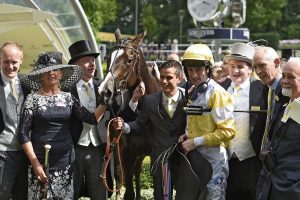 Up Next
Of course she can