Australian racing is in mourning following the death on Monday of jockey Simone Montgomerie following a racecourse fall during the Darwin Carnival.

The 26-year-old daughter of Melbourne Cup-winning trainer Peter Montgomerie suffered “traumatic injuries” after parting company with her mount Riahgrand inside the final furlong of the sixth race at Fannie Bay Racecourse. The final three races on the card were abandoned.

A statement released by Darwin Turf Club read: “Simone fell and sustained traumatic injuries. She was transported from the racetrack to Royal Darwin Hospital with St John Ambulance. Attending to her were two doctors assisted by paramedics.

“It is with great regret that we were advised by the family that Simone passed away shortly after arriving at the hospital.

“The Darwin Turf Club along with the entire industry offer our deepest condolences and sympathies to the family of Ms Montgomerie.”

Montgomerie’s friends and colleagues in the industry paid tribute to her on Twitter, including Sheikh Mohammed’s retained jockey Kerrin McEvoy, who said, “It’s a cruel game at times. Rest in peace Simone. Thoughts go out to the big Montgomerie family. Our pony club days I’ll remember forever.”

Montgomerie, a mother of two, was riding Riahgrand for trainer Gary Clarke, who saddled four of the nine runners for the 1000m contest, including the eventual winner Dreaming Of Nepal. Her father trained the 2005 Melbourne Cup winner On A Jeune. 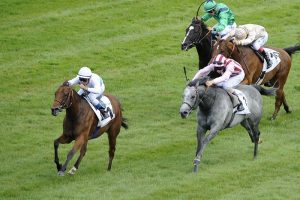 Up Next
Moonlight camp on cloud nine