Jimmy’s all style in the Prix de Meautry

Clive Cox may have one of the most exciting juveniles in Europe in his stable at present but he is also more than capable of keeping the old-timers up to the mark as eight-year-old Jimmy Styles proved with his victory in the Group 3 Prix de Meautry on Sunday.

Clive Cox is enjoying a tremendous run in 2012

Just a week after Reckless Abandon added a fourth win to his unbeaten run with an impressive all-the-way victory in the Group 1 Prix Morny, the Cox team returned to Deauville to claim another valuable French prize. The sprinter was recording the seventh success of his career, following last year’s Cammidge Trophy victory and his 2009 strike in the Ayr Gold Cup.

Jimmy Styles’s consistency in stakes company – which this season includes runner-up finishes in the Greenlands Stakes, Abernant Stakes and Cammidge Trophy – also provides a late last hurrah for his sire Inchinor, who died six months before Jimmy Styles was born after fracturing his leg at Woodland Stud in Newmarket.

During his tragically short stud career, Inchinor was responsible for the likes of Notnowcato, who now stands at Stanley House Stud, Summoner and the crack sprinter Cape Of Good Hope. The gelded Jimmy Styles may yet add his name to Inchinor’s list of Group 1 winners.

The Prix de Meautry was Cox’s third Group victory of the month with Dark Angel three-year-old Lethal Force having won the Hungerford Stakes at Newbury 24 hours before Reckless Abandon landed the Prix Morny. Electrolyser also advertised the good form of the stable with a decent second to Quest For Peace in the Listed Windflower March Stakes at Goodwood on Saturday. 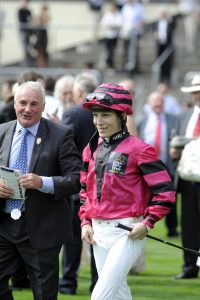 Up Next
‘I’ll leave Canada if Woodbine closes’