Face coverings to be mandatory at courses from Monday
Stories

Two-year-old Mac Swiney relished the soft underfoot conditions at Doncaster on Saturday to capture the Vertem Futurity Trophy, in the process sealing a first victory in the Group 1 event for trainer Jim Bolger.

The field for the mile contest had been reduced to eight with Aidan O’Brien withdrawing favourite Wembley due to the heavy ground.

Cobh, representing Clive Cox, was quickly into stride, with Godolphin’s One Ruler close up.
Mac Swiney, settled behind the leaders, began to make rapid headway two furlongs from home and stayed on strongly to see off One Ruler by three quarters of a length, with Baradar two and a quarter lengths away in third.

Bolger told Sky Sports Racing: “I was hoping that he could win. He’s been improving steadily over the last six weeks. While he’d prefer better ground, we felt that he would get through the ground today and he’s done it really well.

“I’ve been regarding him as my Derby horse since he first went to the races and after today that opinion is not about to change.”

It’s easy to see why Bolger regards Mac Swiney as a candidate for next year’s Blue Riband as the colt is a homebred son of New Approach, whom he trained to land the Classic in 2008, and is out of the Teofilo maire Halla Na Saoire. This is the extended family of Dewhurst Stakes winner Parish Hall, who is also by Teofilo.

Mac Swiney’s victory capped off an excellent few minutes for Bolger as the Mark Johnston-trained Gear Up, another by Teofilo, minutes earlier had taken the spoils in the Group 1 Criterium de Saint-Cloud.

Bolger had bred Gear Up out of the Toccet mare Gearanai, making him a full brother to Group winner Guaranteed, while this is the further family of four-time Grade 1 heroine Dispute.

Despite the disappointment of not being able to run Wembley at Doncaster, there had been joy for O’Brien across the Channel as Van Gogh was an impressive four-length winner of the Group 1 Criterium International.

The win provided Triple Crown hero American Pharoah with a first European top-level scorer. He has been represented in this sphere by a number of other stakes performers including Park Hill Stakes scorer Pista and the Listed-winning Ocean Atlantique.

Van Gogh boasts a classy pedigree having been bred by Barronstown Stud out of the Sadler’s Wells mare Imagine, herself winner of the Irish 1,000 Guineas and Irish Oaks, making him a half-brother to Prix Jean-Luc Lagardere scorer Horatio Nelson and Group 2 winner Viscount Nelson.

That was followed by Lipizzaner, a son of Coolmore America stallion Uncle Mo, returning to winning ways with a length and a quarter success over Just Frank in the Listed Doncaster Stakes. 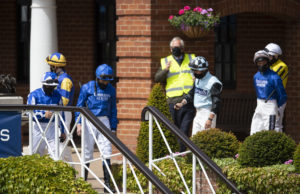 Up Next
Face coverings to be mandatory at courses from Monday