Jezki in command for Harrington

Willie Mullins may be on top of the trainers’ table after the first day of the Cheltenham Festival but his two winners on Tuesday did not include his dual Champion Hurdler Hurricane Fly, who, in attempting his third victory in the Stan James-sponsored feature, faded into fourth place up the run in behind Jezki, My Tent Or Yours and the fast-finishing The New One.

A one-two for owner JP McManus – who was celebrating his 40th Festival winner – saw the less-fancied six-year-old Jezki triumph, making Jessica Harrington only the second woman trainer to saddle a Champion Hurdle winner after Mercy Rimell. The son of Milan outlasted My Tent Or Yours, who was racing in McManus’ first colours, by a neck, with The New One’s late charge illustrating how desperately unlucky he had been to be hampered by the fall of Our Conor, whose death marred an otherwise memorable first day of the meeting.

“I didn’t see much of the final two hurdles because I was doing a lot of jumping up and down and cheering for Barry,” said Harrington, who has enjoyed notable success at the Festival with her former Champion Chaser Moscow Flyer.

“Jezki seemed to travel really well and jumped well apart from the fourth-last where he dragged his hind legs, but then he battled like hell up the hill.”

She added: “I felt Jezki’s two previous races were a bit messy and at Christmas if he hadn’t got shut off we might have beaten Hurricane Fly. He also had a few lengths to turn around with My Tent Or Yours compared with last year, but he didn’t jump the last on that occasion.

“He had little bits of excuses in defeat, but today it all came right and the fast pace definitely suited him. It’s big to win any championship races here – I’ve won two Queen Mother Champion Chases, so now I want to put the Gold Cup on my CV, although it will be hard to do.”

Mullins, who was hot favourite to be leading trainer at the Festival before racing began, is indeed in pole position, thanks to the Supreme Novices’ winner Vautour and perennial Prestbury Park favourite Quevega, who became the winningmost horse at the Festival with her sixth successive victory in the OLBG Mares’ Hurdle, in which she dug deep to overhaul stable-mate Glens Melody.

“She’s just something else and the mare did the talking today,” said Mullins. “She’s got stamina, speed and everything. She’s just class – what more can I say?

“I’m so pleased for her and she has her own place in history now. To get a horse here for six years in a row is enough. Her breeder told me when she was five that she would get better with age and that her mother wasn’t at her best until she was nine. We might be greedy to try number seven next year, we’ll go home and have a drink and a think.” 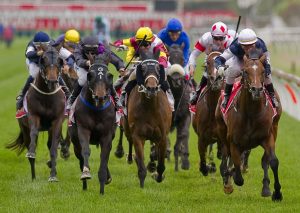 Up Next
Fiorente and Green Moon star