Newmarket to benefit from the schedule

As part of their exclusive four-year-deal to broadcast racing, ITV have announced that they will show 40 days of racing on its main channel throughout 2017.

On January 1, Cheltenham and Musselburgh will become the first two meetings televised on ITV’s main channel after they officially take over from Channel 4 as the sport’s exclusive terrestrial partner.

The remaining days will be split between 14 days of jumps and 29 days of Flat action on the main channel. Racing’s mid-summer festivals including Glorious Goodwood and York’s Ebor festival meeting will feature along with the two juggernauts – Royal Ascot and the Cheltenham Festival.

For now at least there won’t be any adjustments to what many regard as the most congested day of the racing calendar – the final day of Newmarket’s July festival featuring the July Cup. The six furlong Group 1 contest will be shown alongside valuable meetings at York and Haydock on what has been termed ‘Super Saturday’.

Two key days in Newmarket’s calendar – the 1,000 Guineas and Future Champions Day in October – will also take billing on the main channel as will the Craven meeting in April which has been absent from terrestial channels in recent years.

However the Coral Welsh National, Sandown’s Tingle Creek meeting and Cheltenham Trials do not feature on the main roster but instead will be broadcast on ITV4.

ITV also announced on Friday their newest member to their presenting team – At The Races presenter Matt Chapman – who joins a roster which includes former Sky Sports front man Ed Chamberlin and Francesca Cumani, the daughter of Newmarket-based trainer, Luca.

The Guildford-born presenter, who has become renowned for his charisma and flamboyance over the years, will become the channel’s betting reporter.

Chapman said: “I’m very fortunate to be part of an ITV team that loves sport and loves racing, which has captivated me since a very young age. This role provides me with a terrific opportunity to mix the serious world of punting with the fun of a great sport.”

He will be joined by former jumps jockey Mick Fitzgerald, while Hayley Turner, Racing UK presenter Oli Bell, Sally-Ann Grassick and Rishi Persad have all been earmarked for the show.

Chapman later confirmed on twitter that he will be continuing his role with At The Races. 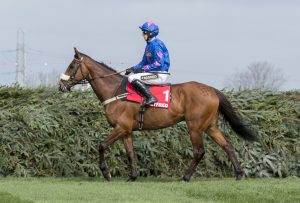 Up Next
Green light for jumps Triple Crown