Frankie Dettori became only the sixth jockey to reach the milestone

One of the finest jockeys ever to grace the sport – Lanfranco Dettori – tasted his 3,000th win in the saddle at Newmarket on Friday evening after partnering the Khalid Abdullah-owned Predilection to victory in the concluding handicap.

I came here 30 years ago with a dream. Whoever thought I was going to ride 3,000 winners?

The three-time champion jockey hadn’t ridden since finishing third aboard the Hugo Palmer-trained Architecture in the German Oaks last Sunday.

With three booked rides on the night, Al Shaqab’s Ghayyar gave him his 2,999th in the maiden stakes for trainer Richard Hannon. It was anticipated that his second ride Blue Geranium would provide the 3,000 in the 1m handicap but she failed to fire despite going off a warm favourite.

The moment came in the last of the six races, as Dettori dictated the pace on three-year-old colt Predilection from the start. The pair kicked on two furlongs down and held off all challengers by a comfortable half-a-length at the winning post.

The 45-year-old was welcomed into the winners enclosure by a thronging 20,000 capacity crowd and didn’t disappoint in treating them to his trademark flying dismount.

“I purposely didn’t ride all week because I wanted to do it at Newmarket, this is where I’m from,” reflected Dettori.

Befittingly, the son of First Defence is handled by John Gosden a figure who has played a major role in the Italian’s career. The Clarehaven trainer has delivered much of the firepower that has reignited his career following the lull after his 18-year association ended with Godolphin in 2012.

The duo teamed up brilliantly last season with Golden Horn who blitzed his rivals in the Epsom Derby and ended the season with triumph in the Prix de l’Arc de Triopme under a tactical masterclass. Their success continued into this year with the likes of George Strawbridge’s Group-winning filly Journey and Dante Stakes-winner Wings of Desire.

Having started out with Luca Cumani back in the 1985, his first winner in the UK came two years later aboard Lizzy Hare at Goodwood in June. From then his talents soon began to shine through and he broke the century of winners just five years later.

It was at Berkshire’s premier venue that Dettori did the unthinkable in 1996. He topped and tailed the seven race card in what has been described as the ‘magnificent seven’. The stellar day included a second QE2 this time on Mark Of Esteem for Godolphin.

At this point he was two years into his retainership with Sheikh Mohammed’s operation having already given the stable a first British Classic winner in the shape of Balanchine in the 1994 Oaks. He went on to ride in excess of 100 Group/Grade 1’s in the royal blue silks, including three Dubai World Cups and four Irish Champions Stakes.

His biggest and most emotional success came away from Godolphin in 2007. After years of trying he landed his first Epsom Derby under the Peter Chappel-Hyam’s Authorized who ran away with the contest by five lengths.

Dettori decided to part ways with Godolphin in 2012 seeking a new challenge, although at the same time he failed a drugs test at Longchamp in September which saw him banned for the first six months of 2013.

Upon his comeback, Dettori was snapped up by Shiekh Johan Al Thani and Al Shaqab Racing. This invigorated a new lease of life into him and he has since enjoyed plenty of success in the grey silks at the highest level, including this season with 2,000 Guineas and St James’s Palace Stakes hero Galileo Gold.

Dettori said: “All my friends are here. It’s not a big meeting, it’s not Royal Ascot, it’s a mundane Friday night with 20,000 people. All my kids are here, I’m emotional.

It’s a fitting day, to win here and it all came down to the last race, there was a tremendous cheer. It was fabulous, I couldn’t have written it better myself.”

The Italian maestro hopes to continue in the saddle for another five years and is arguably riding as good as he ever has. So far this season, he has registered 15 Group race wins, three of which have come at the highest level.

The Milan-born rider will be turning his attention to next week’s Ebor meeting at York where his mounts Wings Of Desire and the Michael Dods-trained Easton Angel both bid for their first Group 1s. 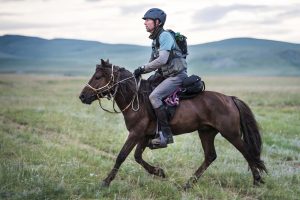 Up Next
Redvers completes Mongolian Derby