Inspiral cemented her position as one of the leading juvenile fillies in Europe with a decisive success in the Group 1 Fillies’ Mile at Newmarket on Friday.

The daughter of Frankel, trained by John and Thady Gosden, was three from three coming into the mile contest, having followed a maiden victory on the July course with triumphs in the Listed British Stallion Studs EBF Star Stakes at Sandown and Group 2 May Hill Stakes at Doncaster.

Cheveley Park Stud’s homebred filly took the step up to the top level in her stride, as Frankie Dettori raced in the centre of the course after breaking from the stalls, tracking Cachet and James Doyle, as the other seven runners, headed by Prosperous Voyage, headed towards the far side.

As Cachet headed over to join the main body, Inspiral followed her as Dettori asked his mount to quicken up passing the two-furlong marker. She quickly asserted her superiority and ran on strongly inside the final furlong, pulling clear to record a comfortable two-and-a-half length victory over Prosperous Voyage, with Cachet a neck away in third. 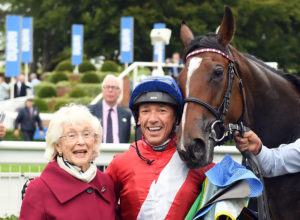 Patricia Thompson with Frankie Dettori and Inspiral after victory in the Fillies’ Mile | Photo: Bill Selwyn

Inspiral will now be put away until next year for a Classic campaign, with a return to the Rowley Mile for the 1,000 Guineas – a race in which her dam, Starscope, finished runner-up to Homecoming Queen in 2012 – first on the agenda.

John Gosden said after the race: “She won well in the May Hill and was learning there. She was pretty professional today, so I think that is a fair comment that she has come on for racing.

“She travelled well into the race and handled the dip. I’m very happy with her and she took it well. She is a big girl, but she is getting stronger all the time.

“She just always did everything easily. When we ran her first time on the July course she had only ever been on the bridle.

“She was a little confused, but she showed her class straight away. She is a filly that would be easy to over-train, so she wasn’t tried at home first.

“You want to know if they will handle the dip. If it was fast ground, it might be different but she handled it well today.

“You either go straight to the Guineas, go for a trial or a racecourse gallop, but it is a long way off. All I know is she is not going to Del Mar!

“She is one to put away for next year. It is great for the owner-breeders with [Cheveley Park Stud owner] Patricia Thompson here. It is very fulfilling for owner-breeders to have a filly of this quality.”

Earlier on the card, William Buick produced a fine front-running ride on Godolphin’s Al Suhail for boss Charlie Appleby in the Group 2 Challenge Stakes (7f), coming home three-and-a-half lengths clear of With Thanks.

James Doyle also recorded an all-the-way success aboard the Simon and Ed Crisford-trained Fast Attack in the Group 3 Oh So Sharp Stakes (7f), fending off the challenge of Allayaali and Jim Crowley to cross the line a length to the good. 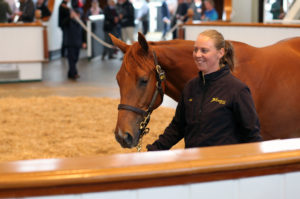