As big a Royal Ascot tradition as the royal procession, world-class racing and singing round the bandstand is the pre- and post-race picnic in the car park.

The fact that the Royal meeting is a quintessentially English event no doubt increases its appeal for overseas visitors and various racing organisations around the world have identified it as one of the best places to mix business with pleasure.

At the forefront of the post-race picnicking is Australian sales company Inglis, who, in association with their British counterpart Tattersalls, host one of the week’s most popular and well attended events.

Royal Ascot never passes these days without at least one decent Australian sprinter in the line-up and this year there may have been no star to equal Black Caviar – and let’s face it, few can – but Group 1 winners Shamexpress and Sea Siren were on hand to ensure that the thousands of Australian racing fans who sit up through the night to watch the meeting had familiar names to cheer on. Neither managed a top-three finish this year but they have both remained in Europe with Shamexpress on course for a crack at the Darley July Cup at Newmarket on July 13.

Plenty of trainers, owners and breeders of all nationalities descended on the Inglis ‘Aussie Picnic’ following racing on the first day of Royal Ascot, including John Messara, who is about to welcome the Kentucky Derby and Dubai World Cup hero Animal Kingdom to his Arrowfield Stud in New South Wales. He was joined by the Queen’s Racing Manager John Warren, Shamexpress’s trainer Danny O’Brien, who was enjoying his third visit to the Royal meeting, and Australian-born BHA Chief Executive Paul Bittar.

“This event is our way of thanking our European clients, celebrating the Australian runners and showcasing not only some of the best Australian-bred horses but also our terrific wine and beer,” said Mark Webster, Managing Director of Inglis.

“With Black Caviar destined to become a mother over the next few years, who knows, maybe we will witness one of her offspring competing at Royal Ascot in years to come.” 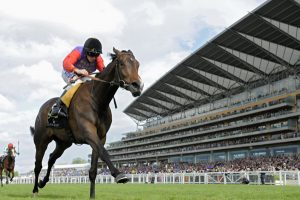 Up Next
Truly Ladies’ Day