Turnover of A$132,160,000 testament to the strength of Australia’s racing industry as I Am Invincble’s stock shines in Wednesday’s final session

A remarkable renewal of the Inglis Australian Easter Yearling Sale drew to a close on Wednesday with a set of figures that further underlined the resurgence of a market that only 12 months ago was at the mercy of the pandemic and its ramifications.

Headed by a Snitzel colt out of Group 1 winner Rising Romance who sold for A$2.5 million to Hawkes Racing on Tuesday, there were 22 seven-figure yearlings, up from seven in 2020 and 19 in 2019.

The clearance rate was a remarkable 88%.

“As we say often, these sales are three years in the making for the breeders and vendors and to see the emotion in so many people at Riverside the past 48 hours, it really justifies all the hard work everybody puts in to achieve results like this,’’ Inglis Managing Director Mark Webster said.

“To see 22 horses realise $1 million or more, to see an Easter clearance rate of 88% and climbing, to see a gross that signifies so many amazing results for a wide spread of clients, it’s really amazing and very satisfying.

“It would be remiss of me not to thank my own team, the work they do and the hours they put in to ensure sales like this are as successful as they are is immeasurable.

“And finally, to everybody who supported this sale, from the breeders and vendors who chose to bring their best stock to Easter and to the buyers who made huge sacrifices to be on the grounds and those who bid online, we salute you and we thank you for ensuring Easter again remains the Best of the Best.”

“As we say often, these sales are three years in the making for the breeders and vendors”

On a day dominated by the progeny of I Am Invincible, it was a regally-bred daughter of Yarraman Park Stud’s sire-of-the-moment that topped proceedings on a bid of A$1.95 million to Sheamus Mills Bloodstock.

In the process, she led a clean sweep of the day’s top three spots for the champion sire and was one of eight million-dollar yearlings for him overall.

The price also marked a new benchmark for an I Am Invincible yearling filly at auction and makes her the second highest priced yearling by her sire ever sold.

Bred by Katom and sold through Coolmore Stud, the filly is a half-sister to Listed winner Lake Geneva, an excellent two-year-old who also ran third in the Golden Slipper Stakes, and Group 3 winner Ennis Hill. They are out of Hips Don’t Lie, a daughter of Stravinsky whose five wins included the Group 2 STC Reisling Stakes.

Mills said plans called for the filly to join the stable of Mick Price.

“We really, really wanted her and didn’t think we’d have to pay that much for her, so we were forced to go above expectations, but she was the best horse in the sale for us and we got her,’’ Mills said.

“We got two I Am Invincible fillies for the same ownership up on the Gold Coast earlier this year and didn’t have to pay this sort of money – I think the market has reacted and earlier this year they were probably selling for good value, it certainly looks that way now because it’s a lot tougher to get them here.”

Introducing the most expensive I Am Invincible filly ever sold! Congrats to @CoolmoreAus @TomMagnier @JamesBester4 & the team on #InglisEaster lot 340, the magnificent Hips Don’t Lie filly, which sold to @SMBloodstock for $1.95m, making her today’s top lot. Congrats! pic.twitter.com/1QzhbvMU02

The filly is the fourth yearling out of Hips Don’t Lie to make seven figures at auction. Even so, Coolmore’s James Bester, who purchased Hips Don’t Lie for NZ$200,000 as a yearling and maintained an interest in her at stud, was staggered by the result.

“We had high expectations, she’s an I Am Invincible filly and from the day she was born she was the best the mare had ever thrown with a beautiful head and great quality and class about her everywhere, so we’d been looking forward to this day for some time,” he said.

“We thought she’d make over $1 million, looking at the other Vinnie fillies this week we thought it was likely she would make $1.25 million, but what a thrill to get to $1.95 million. It was very emotional and very exciting.

“I don’t think anyone with a high-quality individual has come away from this sale unhappy. It’s been an awesome sale, a very good buying bench put together given you couldn’t have any internationals flying over here really.”

Coolmore were on the other side of the transaction for the day’s most expensive colt, an I Am Invincible son of dual Group 1 winner Cosmic Endeavour who was knocked down to Tom Magnier at A$1.4 million.

Consigned by Kia Ora Stud on behalf of breeders Don and Judy Kelly, the colt is the second foal out of Cosmic Endeavour, who carried the Kelly’s colours to victory in the Group 1 ATC Canterbury Stakes and Qld Tatt’s RC Tattersall’s Tiara.

He is likely to be trained by Chris Waller.

His price was later matched by another highly sought after I Am Invincible youngster in a filly out of the stakes-placed Miles Of Krishnan, a Snitzel half-sister to New Zealand champion Il Quello Veloce. Ellerslie Lodge and Bryce Heys signed the ticket on the filly, who continued a momentous sale for vendor Vinery Stud; in all, their consignment sold four million-dollar yearlings and were leading vendor by average thanks to a figure of A$650,625.

I Am Invincible’s stunning day also consisted of fillies who made A$1.2 million apiece; Chris Waller and Hermitage Racing came away with the filly out of top two-year-old Catchy while Rosemont Stud secured the half-sister to Listed winner Thrillster.

Team @CoolmoreAus had Lot 253 in their sights since inspecting him on farm pre-sale at @kiaorastud. They’ve secured him for $1.4m on Day 2 of #InglisEaster and he will now head to @cwallerracing. pic.twitter.com/7uiY5Qlon0

Such market confidence pushed I Am Invincible’s average to A$615,488 for 41 sold, second to only Darley’s Exceed And Excel, for whom a big week resulted in an average of A$984,000.

It wasn’t all about I Am Invincible, however, as two million-dollar yearlings also came the way of Tweenhills Farm’s shuttler Zoustar.

They were led by a colt out of Inglis 2yo Classic winner Lady Jivago for whom Matt Laurie paid A$1.25 million out of the Widden Stud draft.

Another youngster, a colt out of Group 3 winner Fireworks, was also popular, selling out of the Segenhoe Stud draft for A$1.15 million to Moody Racing, Rosemont Victorian Alliance, Suman Hedge Bloodstock and David Redvers.

Of the other European stallions represented, Kingman’s sole offering, a colt out of 45,000gns Tattersalls July purchase Bound Copy, realised A$600,000 to Aramco on the first day while a quartet of yearlings by Siyouni averaged A$360,000. Five yearlings by Frankel sold for an average of A$297,000.

The sale was also a poignant one in that it contained the final yearlings to pass through a southern hemisphere ring by Deep Impact and Redoute’s Choice, both titan stallions within their respective jurisdictions.

As for the final clutch of offerings belonging to Redoute’s Choice, they averaged A$430,833 and included a colt out of Lahana who sold for A$800,000 to Asian Bloodstock Services. Fittingly, he was co-bred and sold by Arrowfield Stud, the mastermind behind Redoute’s Choice’s championship stud career.

The last of Redoute’s Choice progeny has just sold at #InglisEaster to @moodyracingpgm. Lot 418 (ex Mella Maria) offered by @FernriggFarm represents the end for the industry’s greatest stallion’s progeny in the sale ring. What a champion he was! pic.twitter.com/knpMLIKtSg

“It was sad because it is the end of an era but as I said to everybody I’ve spoken to, he’s dead but he’s not gone,” said Arrowfield’s John Messara.

“His legacy will live on through his sons and daughters as we see every weekend.”

The leading buyers were Coolmore and partners, who paid A$9,375,000 for nine purchases, ahead of Tony Fung Investments, who came away with eight yearlings worth $7,020,000. Gai Waterhouse/Adrian Bott and partners took home most individual lots at 15. 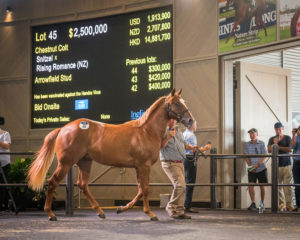