Sale was topped by a 160,000gns daughter of Zoustar

By The Owner Breeder staff 06 September 2022

A daughter of Tweenhills’ shuttler Zoustar headed a competitive renewal of the Tattersalls Somerville Sale in Newmarket on Tuesday when sold for 160,000gns to Richard Hughes.

“Last year’s inaugural Tattersalls Somerville Yearling Sale proved to be an immediate success and today’s second renewal has made further significant progress with wide margin gains in all the key indicators of average, median and turnover, as well as a new record top price for a Somerville yearling of 160,000gns,” said Tattersalls Chairman Edmond Mahony.

“It was very apparent as we were inspecting yearlings in the spring that there was genuine enthusiasm for our newest yearling sale from both British and Irish consignors and they have supported the fixture with exactly the profile of sharp, precocious, commercial yearlings which we were looking for. To see the average and median prices both rise by more than 40% and the sale turnover increase from under five million guineas to well in excess of seven million guineas demonstrates a sale of real vibrance from start to finish.

“Equally impressive has been a clearance rate nudging 90% and the number of yearlings selling for 50,000 guineas or more which has risen from 17 to 39 while six figure transactions have increased from one to four.

“The sheer number of buyers here at Park Paddocks over the past few days is also a reflection of the racecourse success enjoyed by so many graduates of last year’s sale, most notably the Group 2 Coventry Stakes winner Bradsell, and we look forward to similarly impressive results next year as well as to sustaining the momentum of today’s sale into Books 1 to 4 of the forthcoming Tattersalls October Yearling Sale.”

The Zoustar filly capped an excellent day for her breeder Plantation Stud, which also sold a Shalaa colt for 120,000gns in a draft of only two yearlings.

“I loved her from the first time I saw her,” said Hughes. “She will take a bit of time but she is very nice and a good walker – she has very good movement.”

From the second crop of Zoustar, a highly accomplished stallion in his native Australia whose first northern hemisphere two-year-olds include Group 3 winner Lezoo, the filly is a half-sister to American stakes winner Unanimous Consent and out of Fast Lily, a placed half-sister to the  Lowther Stakes winner Silk Blossom.

As for the Shalaa colt, he will join Archie Watson on behalf of Victorious Racing.

“He is a lovely individual,” said St Lawrence. “He is for Fawzi [Nass] and team and will probably end up in the red and white colours of Victorious Racing.”

Bred by Plantation Stud, the colt is a half-brother to two winners in Operatic and Dynamic Force, and out of Dream Dana, a winning half-sister to Listed scorer Yaa Wayl from the family of the Prix de l’Abbaye heroine Wizz Kid.

St Lawrence added: “The mare is two from two and are both rated up in the 90s.”

Remarkably, both yearlings were unsold as foals; the Zoustar filly was bought back for just 18,000gns while the Shalaa colt failed to sell at 20,000gns.

“We are over the moon,” said Plantation manager James Berney. “She deserved to make that type of money as she is a beauty. She has improved greatly through the year and her brother’s form has helped as well.

“She has been A1 since she got here, she has been very busy with a lot of vets, and she has never turned a hair. And we are delighted that she is going to Richard Hughes.” 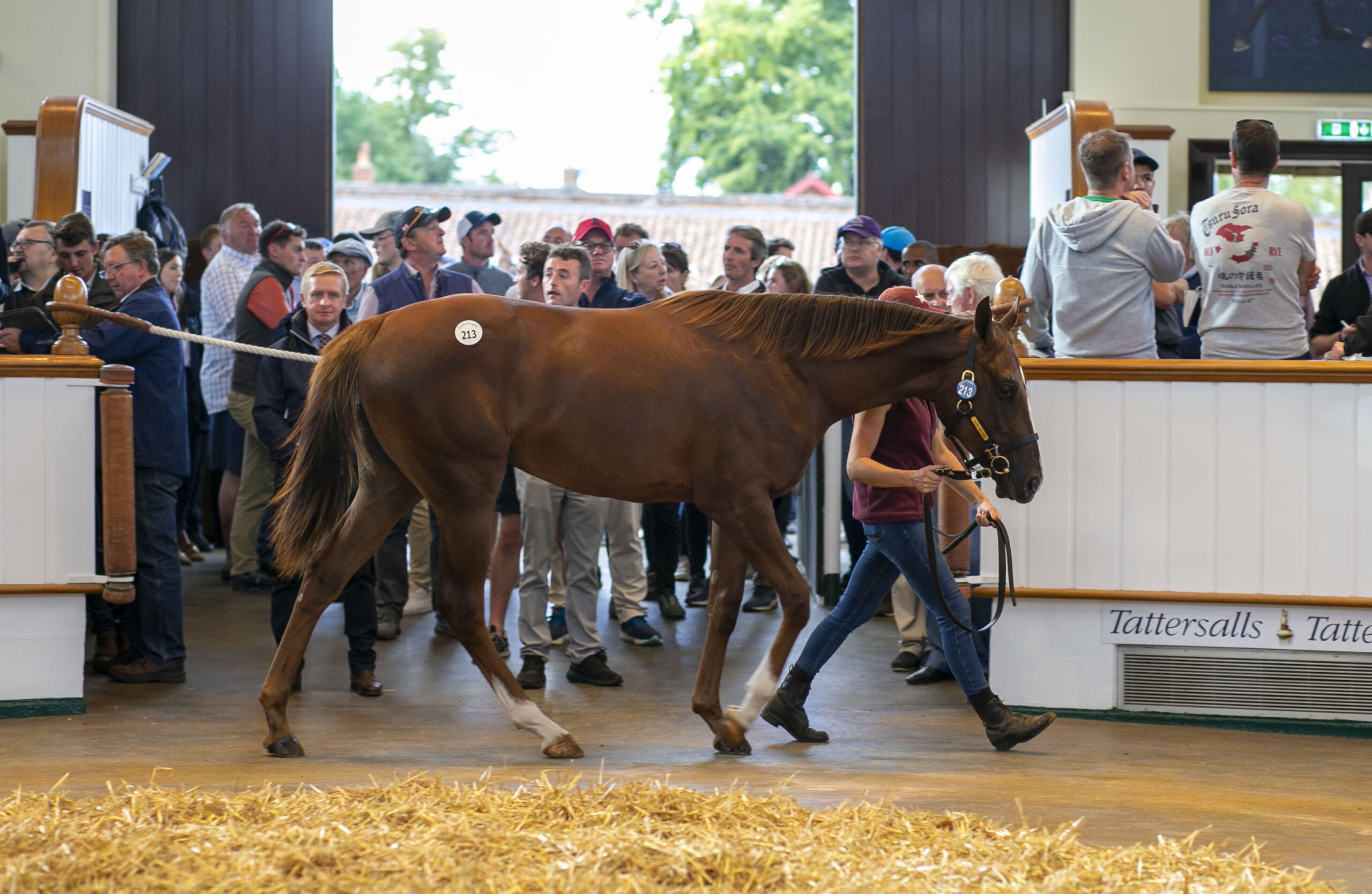 Rarely does a sale pass nowadays when Tally-Ho Stud’s Mehmas isn’t in the thick of the action, and he was back in the limelight on Tuesday, this time thanks to a colt from Aughamore Stud who sold sold to Peter and Ross Doyle and Aguiar Bloodstock for 135,000gns on behalf of Amo Racing.

“He’s a very nice colt by an unbelievable stallion,” said Ross Doyle. “Mehmas needs no introduction, he is a horse who has been a very good friend to a lot of people, including us, and hopefully he will continue to do so.

“The farm has done a great job prepping him, he looks fantastic, and everybody – Robson [Aguiar], Kia and Richard [Hannon] liked him.”

Bred by the Gleeson family’s Aughamore Stud, the colt is the fourth foal out of the Exceed And Excel mare Classic Image, who hails from the family of the Group 1-winning two-year-old Serious Attitude.

“He’s a homebred and the best the mare has produced,” said Laurence Gleeson, who operates Aughamore alongside his brother Michael. “We bred to Mehmas the year he had first two-year-olds as we’d heard there was a good word from the breezers and we decided to take a punt. Luckily it worked out!

“It also worked out well with Minzaal winning so impressively at the weekend [in the Betfair Sprint Cup]. He’s a freak of a stallion.

“This colt has been a star here. A lot of people said he was a stand out and you don’t want to get your hopes up too much but it has all worked out in the end.”

Meanwhile, a Starspangledbanner colt will carry the colours of Teme Valley Racing after falling to agent Richard Ryan for 130,000gns.

A homebred of Ballyhimikin Stud’s, the colt is a half-brother to three winners and out of Black Rodded, a Bahamian Bounty sister to the Listed-winning two-year-old Queen’s Grace.

“He was an unexpected horse to find in this sale,” said Ryan. “You don’t know where they will present themselves and I thought he was a different ball game to the rest of the field.

“He’s a good, strong colt with a great backside, very well prepared and from a real speed family. Starspangledbanner is a super stallion – he works with all kind of families. This horse had particular strength about him. He’s a proper horse – he will make a lovely two-year-old.

“He will probably go into training in Ireland.” 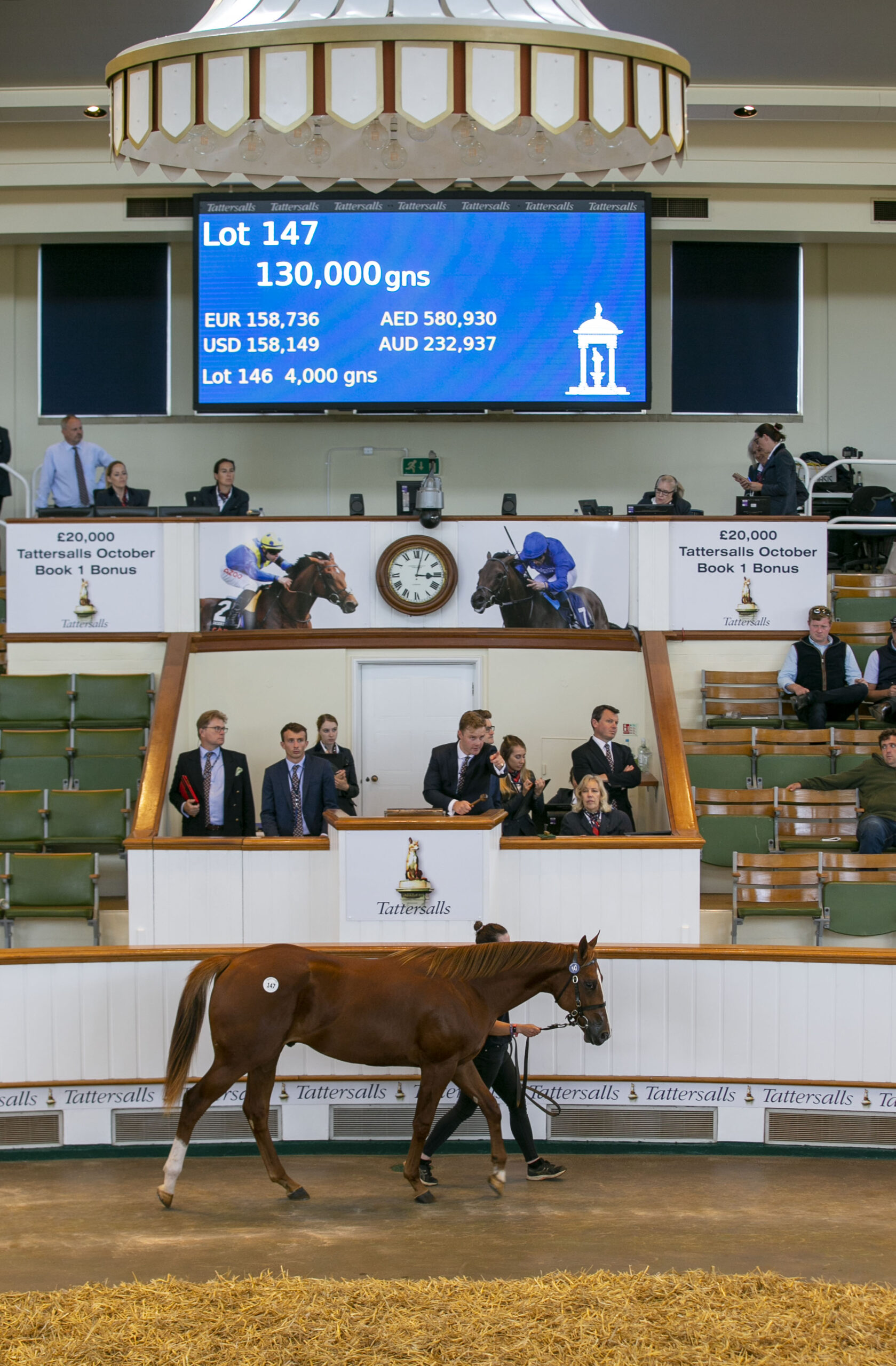 Up Next
Built to last - Germany celebrates 200 years of racing