The sixth inaugural running of Britain’s richest raceday – Qipco Champions Day – offered what looked on paper to be one of the most exciting and top-class cards in recent memory.

With four well represented Group 1s and a competitive renewal of the Group 2 Qipco Long Distance Cup, it certainly didn’t disappoint in living up to its billing.

The feature race, the £1.3 million Champion Stakes went back to France yet again, as Almanzor put up a stunning performance to take the mile and a quarter contest for Jean-Claude Rouget.

In the colours of owner Ecurie Antonio Caro, Almanzor dwelt from the stalls but soon recovered into fifth under Christophe Soumillon. Godolphin’s Maverick Wave took his nine rivals along with Found settled just off Almanzor’s heels and John Gosden’s returning Jack Hobbs held up in the last trio.

Swinging into the straight, the favourite was pulled off the rail and came with a sweeping run inside the final furlong and half with Ballydoyle’s Arc winner just on his quarters. The three-year-old pulled out extra in the run to the line going away to win by two lengths from his old adversary Found.

A flagship horse this season for Soumillon, the 35-year-old has partnered the colt on five of his ten starts with Jean-Bernard Eyquem in the saddle for the other half, which included a French Derby win back in June.

A son of Haras d’Etreham’s resident stallion Wootton Bassett, Almanzor adds a third Group 1 to his record this season following an impressive last-to-first victory in the Irish Champion Stakes at Leopardstown five weeks ago.

“He’s an amazing horse, everything you do with him looks easy,” reflected Soumillon.

“I would never have thought in the beginning of the season he would be that strong all year, he is nearly unbeatable and he’s getting smarter and smarter.”

For Rouget, who brought up 6,000 career winners earlier in the season, his fine vein of form is rounded off spectacularly. Set to be French champion trainer, this success brings the Pau handler’s Group 1 tally for the year up to an impressive eight.

Indeed, Almanzor becomes Rouget’s second triumphant of the Champion Stakes, his first having come with the £40,000 purchase Literato in 2007.

Rouget said: “He did the same performance as he did in Leopardstown and five weeks was sufficient time between these two races.

“He beat Found more than last time but I think she has the Arc run in her legs but she still ran very good. I would keep him next year and we’ll see if we go for the Arc or not.”

Earlier in the afternoon, The Tin Man notched his first success at Group 1 level by landing the Qipco Champions Sprint Stakes over six furlongs.

The son of Equiano was held up towards the far side under Tom Queally in the slipstream of long time leader Signs Of Blessing.

He accelerated to the front inside the final half furlong and held off his pursuers by a comfortable length, giving his trainer James Fanshawe his biggest success of the season.

Everything you do with him looks easy

The four-year-old filly by sire of the moment Dubawi, travelled strongly behind the leader Pretty Perfect and was still on the bridle just over a furlong out. When asked by Dettori, she stormed clear of her field to score by an emphatic four lengths in the silks of owner George Strawbridge.

Minding ensured Ballydoyle got themselves on the scoresheet with a dominant display in the Queen Elizabeth II Stakes over a mile.

The English Guineas and Oaks heroine raced handily towards the far side in the slipstream of outsider Barchan. Ryan Moore asked his six-time Group 1-winning filly with two furlongs to go and she moved to the front.

Ribchester and Lightning Spear tried to run her down but she held on to take a seventh success at the highest level by half-a-length. 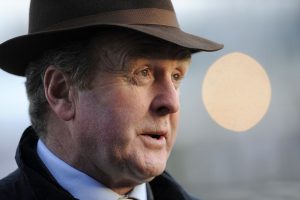