In a competitive renewal of the Grade 3 Imperial Cup, the improving London Prize added the biggest success to his tally so far holding off all challengers up Sandown’s stiff finish to take the valuable two mile contest.

Now in line for a bonus should he take up an engagement at Cheltenham next week, the six-year-old gelding was held up in the early stages under Tom O’Brien.

With the race hotting up on the turn for home, the two Gary Moore contender’s, Darebin and Not Another Muddle, looked to seize the advantage after the second last.

But London Prize was gathered up by O’Brien down the outside and after getting a clean and fluent jump at the last hit the front, keeping a rallying Fixe Le Cap at bay by a length.

A son of Teofilo, London Prize was running on the back of a good effort on the Flat against an in-form Godolphin rival.

His previous run over hurdles in the Listed Scottish County Hurdle at Musselburgh saw him travelling well before falling four out behind Diego Du Charmil.

For O’Brien this win came as some relief to the news which broke earlier that Finian’s Oscar, a live contender next week at the Cheltenham Festival, will not be lining up.

“I was delighted to get the call up to ride him,” reflected O’Brien.

“He’s very very progressive. I had a fall the last day when he was going well but he battled that out nicely. There’s plenty more left definitely.”

His trainer, Ian Williams registers another valuable handicap prize to his roster but wasn’t in attendance at the Esher venue after his car broke down on the M4 motorway.

The son of Oscar, who had previously come up against some talented types in novice hurdles, showed his potential by coming away to score by just over a length in the now familiar Masterson Holdings Ltd silks. 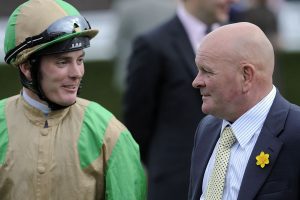 Up Next
Sprint King retires