I did it my way

Talking to Alan McCabe, trainer of Breeders’ Cup hopeful Caspar Netscher about his career and ambitions for the future

Your wife Marie has said that you “have no racing pedigree”. So how did you end up working in the sport?

I started in pony racing and joined showjumper Eddie Macken’s mother-in-law for a while. I didn’t have much success pony racing, but it was great experience and a very good grounding for me. Then, through Joe Byrne, who was champion jockey at the time, I got in touch with Noel Meade and went to work for him.

How did you enjoy life as a jump jockey and what were the highlights?

It was a real buzz and a privilege to ride some really good horses like Air Tours, Couldnt Be Better and Nemuro, on whom I beat Pridwell and Richard Dunwoody in the Welsh Champion Hurdle. But I was always interested in the training side and I suppose everything was leading in that direction.

You left Ireland and joined David Elsworth in 1987, finding yourself involved with stars such as Desert Orchid and In The Groove. Did this give you the bug to train?

Working with those very talented horses was what you’d always wanted to do. They gave the job an edge and ultimately had you thinking to the future and the possibility of setting up as a trainer yourself. When I was with Godolphin I used to ride out Kheleyf, the St Leger winner Rule Of Law and was involved with Dubai Destination.

When I was with David Loder in Newmarket we had a couple of boxes in the town and did a bit of pre-training and playing about with horses; it was at that time I bought a horse called Kabeer and we put him into training with Jamie Poulton.

Can you explain what you learnt from working with all those trainers?

They have all got their own styles. I learnt so many different things from them all; the horses’ wellbeing, how you fed them, the workload, treating them as individuals. I can take something from each one of them. It was a massive learning curve for me.

David Elsworth is a genius and was champion trainer when I was with him; he understood each horse, he watched their physique develop, knew all their mannerisms. He saw them grow from young and could almost read their minds. And David Loder would have been a champion in his own right, but he was just training two-year-olds, preparing them for Godolphin.

How big a part does Marie, who writes a regular blog for the Racing Post, play in your training operation?

A huge part. Marie runs the shop in the office with a very good girl called Vicky. Marie is basically in charge of the clerical and business side of the operation, juggling the bills! And that leaves me to devote everything to training the horses.

You established yourself as a salaried trainer for Paul Dixon in Retford. You must have been delighted when he chose you above other more experienced candidates…

Funnily enough, I’d read in the paper that Mr Polglase had left the job and straight away I put a CV together and sent it in. Paul Dixon had me thoroughly vetted and had spoken to David Elsworth and David Loder, so I’d like to think they’d said something good about me! I think Paul Dixon was looking for someone young, eager and wanting to get on.

How daunting was it to take the plunge and set up your own yard?

It was very tough and there were a lot of obstacles in the way, one of them trying to find the right place to train from. Looking back now, I wouldn’t want to go through it again. It was a very hard time, very tough on the family as we weren’t certain what was happening or where we were going. Thank God, we came through. We had support from some good owners and, luckily, Arena Leisure put me up at Southwell, where I could train.

Then John Fretwell – ‘Gentleman John’ as I call him – very kindly got us into a house because we hadn’t any family accommodation. It was August two years ago, right in the middle of the recession. Now we have a fantastic team doing a great job, from the hard-working tractor driver right through to the girls in the office.

You’re enjoying your best ever season numerically and won your first Group races with the exciting two-year-old Caspar Netscher. What’s been the key to your success?

We’ve been lucky to have horses like Fratellino, who brought us to the fore finishing second in the Windsor Castle Stakes at Royal Ascot. Then we had Azrael, another nice two-year-old last year. Now we have one winning the big races, Caspar Netscher. Of course, it is crucial to have the right staff. If we hadn’t got good,hard-working staff, I couldn’t train the horses. Simple as that. 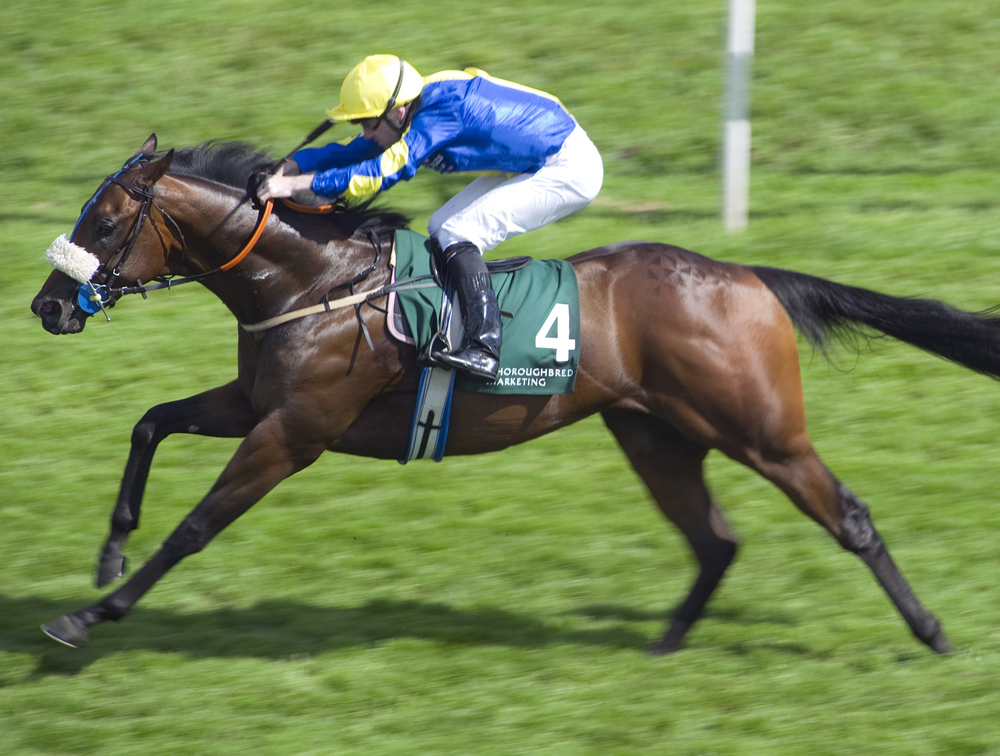 The talented Caspar Netscher will end his season in America

Caspar Netscher was desperately unlucky when a fast finishing fifth in his last race, the Middle Park Stakes at Newmarket…

My initial reaction was to feel gutted. Unfortunately, he got shuffled back and it was a split second decision to go left or right to deliver his challenge. He went left, but Robert [Winston] reckons he would have won if he’d gone right.

But I’m afraid that’s the way it goes. Caspar Netscher was the best horse in the Middle Park and at least we know we have a horse that can compete at Breeders’ Cup level.

How did Charles Wentworth, the owner of Caspar Netscher, select you as his trainer, and will he re-invest?

Just over a year ago, through a mutual friend, I was asked to go to meet Charles and his wife at Beverley. We had a chat and he said he wanted to see the yard. He must have liked what he saw as he sent me a few horses and we went from there. Charles says he is interested in buying some more.

You have been aiming Caspar Netscher at the Breeders’ Cup Juvenile Turf for some time. What makes him the right type for that?

He is tough; his constitution is fantastic. He is very easy to handle, travels well and does everything you ask of him. He also possesses the necessary speed – all the right credentials to do well over there.

You can never be certain how they will react to long flights and strange surroundings and routines, but we have travelled him up and down the country and he takes it well. Charles lived in America for a few years, follows the racing there and has always been interested in having a runner there.

Have you had orders for the sales this autumn after your success this year?

I wouldn’t say we’ve had orders, but we’ve had interest, some phone calls and meetings at the sales. I’ve been speaking to a few people, looking at yearlings and possible purchases.

What experience do you have of American racing?

I worked for American-based Eoin Harty in Dubai for six months. I have friends working out there and have been to Santa Anita and watched trackwork. They work on a pace; they jump and run. We have seen that Caspar Netscher needs a gallop, so he seems sure to get a truly run race. I like the racing in the States and invariably the best horse wins.

Does your landlord John Fretwell have plans to send you some horses?

Not that I know of. I speak frequently with John. He has horses next door with David Brown and he often pops in to look round the yard. I have never talked to him about having a horse here. His son Paul is an exceptional buyer of a horse and they work as a team and have a system where they have their trainers, Ed McMahon, David Brown and Kevin Ryan. You never know, if I’m lucky I might get one.

Having made your name with cheaper horses such as Capricorn Run and Cornus, is there extra pressure buying in a higher category?

Obviously when they come here with a price tag on them, you think so. But basically we treat them the same. It doesn’t matter what they cost, the prime objective is to win races. I have one that cost £120,000, another £100,000; Caspar Netscher cost £65,000.

Do you rely on your own judgement or are agents and owners involved?

Sometimes I go, but I get on well with Tom Malone, one of the best young bloodstock agents around. He knows the type I like, so we discuss them. Then I go and view the ones he recommends and after that I call the interested owners and we all gather at the sales.

What effect did the economic downturn have on the business – how many horses do you have in the yard?

We started in the middle of it and have been very lucky. We came here with 15 horses and it has grown to 65. We have been let down by one or two people financially, but these things happen and we have still managed to build up the business. I find 65 a nice number to work with, though we could handle a few more.

Are you a supporter of tariffs and what would you like to see done to tackle the prize-money issue?

We are getting too many lower-grade races, which are being put on cheaply by racecourses so they don’t violate the tariff. If I type in ‘0-65 races’, I get three pages of them; it’s unreal how oversubscribed they are.

If loopholes, which allow bookmakers to be offshore without putting any money back into racing, were closed the situation might improve. I was pleased to read the bookmakers are helping the Arena Leisure courses Lingfield, Southwell and Wolverhampton to increase prize-money, but that is only for low-grade races. Bookmakers are helping Arena out so they can bet on those races. Yet again bookmakers will be benefiting.

What we need is more money for better races. Owners are paying good money to have horses in training and expect to be racing for good money.

Bookmakers should be made to play a bigger part in tackling the prize-money issue, but, unfortunately, I don’t think they will. The only way would be for the government to introduce legislation that would benefit racing’s finances. Also, the BHA should take a much stronger stand. If they have to cut fixtures, that should be the course of action.

What do you make of the whip rules?

I think the changes were introduced too hastily, without enough thought and the penalties are harsh. Too much emphasis is on the public’s perception of racing and the use of the whip. I have some lazy horses here and they need cajoling.

They are not going to be hurt by the modern, air-cushioned whip. The horses in my yard are treated likely royalty, better than a lot of humans. The new health and safety culture is driving this new rule.

Do you and Marie ever have time together away from the business?

We go on holiday together to Florida, but we still don’t get time to relax because the business still goes on and we are still involved, even though a long way away and six hours behind UK time. We do like to get away for a weekend to see Marie’s parents in Hampshire.

When I come in I like to sit down and watch At The Races. I think Marie is going to buy me a new TV so I can go to another room to watch it!