Prix de l’Arc de Triomphe and Irish Derby-winner Hurricane Run has died at the age of 14 due to complications at home.

The son of Montjeu stood at Gestuet Ammerland, where he was bred, for the last four years having stood on the Coolmore roster upon retirement at the end of 2006.

A statement released by the stud located on the outskirts of Munich said: “We are deeply saddened to announce that we had to give up our great stallion Hurricane Run due to serious complications during a planned routine operation on Wednesday morning.

“We would like to thank all the breeders who supported him.”

Trained by multiple French champion trainer Andre Fabre, Hurricane Run’s Group 1-winning sequence began in the Irish Derby, when he got on top of Ballydoyle’s Scorpion on the run to the line in the familiar colours of Michael Tabor.

Four months later under a fantastic ride from the same pilot, he took the inside route in the Prix de l’Arc de Triomphe and went away to score by two lengths, with that year’s Epsom Derby-winner Motivator trailing in his wake.

An easy win back at the Curragh in the Tattersalls Gold Cup as a four-year-old was followed that year by his final success at the highest level in the King George VI and Queen Elizabeth Diamond Stakes at Ascot in July.

He signed out his career that season with a sixth-placed finish in the Breeders’ Cup Turf.

“It’s very sad news. I saw him a month ago and he looked great. He was a fantastic horse for me,” said Fabre.

We would like to thank all the breeders who supported him

As a stallion, he produced just shy of 50 stakes performers, 13 of which have been Group winners.

He had big race success only recently as his son Ectot, out of the mare Tonnara, won the second Group 1 of his career in the Joe Hirsch Classic Stakes at Belmont Park for trainer Todd Pletcher.

As well as siring some smart Flat performers, he also made a good impact over jumps.

With plenty of his performers rated 100 and higher over obstacles, some key horses to note include Time To Work, a six-time winner, and Kelvingrove, a four-time winning hurdler for Jonjo O’Neill. 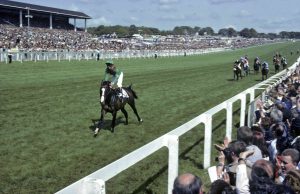 Up Next
Riding sensation dies aged 55