Hurricane Lane the toast of Doncaster in St Leger

Hurricane Lane captured his third Group 1 of the season when recording an authoritative victory in the St Leger at Doncaster on Saturday.

Placed in mid-division by jockey William Buick from the start, the three-year-old made smooth progress in the home straight before hitting the front with a quarter of a mile left to run.

Derby runner-up Mojo Star, who had finished fifth to Hurricane Lane in the Irish equivalent in June, tried in vain to rally but could only finish two and three quarter lengths behind the winner. There were a further two lengths back to The Mediterranean in third.

Trainer Charlie Appleby, who secured his first victory in the St Leger, said: “It’s unusual in these Group 1s and Classics to be able to enjoy watching a race. But it was one of those races when I was always comfortable with the way William had him positioned and how the horse travelled.

“As William said, when he turned in he had everything there in front of him and all the room he needed. It was only a matter of time to ask him to click through the gears. For a horse who stays a mile and six, he’s got a gear change and that’s what makes him stand out from the rest at the moment.

“What I love about Hurricane Lane is in the paddock he walks around like an old boxer, as cool as you like. He knows when it’s time to bring his A game on. He’s very much like that in the mornings.

“It’s a Classic. Some people would have swayed coming to the St Leger but you can’t beat tradition and history and this is steeped in it.”

For Buick it was a third win in the race and he added: “It’s fantastic to win another St Leger. These horses need to be cherished when they are around.

“Charlie and His Highness Sheikh Mohammed were adamant this horse went to the Leger after he won the Grand Prix de Paris and it paid off today. A lot of people work very hard behind the scenes and I’m very privileged to ride these great horses.

“It was a lovely performance and he’s a jockey’s dream. You can put him anywhere in the race and he relaxes, which is obviously vital over this distance. What’s impressed me the last couple of times he’s run, is the way he quickens at the end. He really did put the race to bed there.” 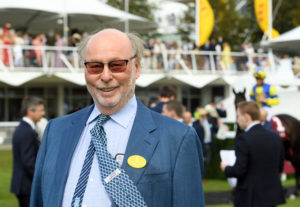