Son of Frankel impresses on the Knavesmire

Prior to Thursday, the last time Godolphin captured the Dante Stakes came 19 years ago when Moon Ballad struck in the extended ten-furlong event for Saeed bin Suroor and Jamie Spencer. This year’s renewal of the Group 2 went their way with the unbeaten Hurricane Lane.

It was a race that included many Derby hopefuls including Aidan O’Brien’s highly regarded High Definition, who had missed Lingfield’s Derby Trial on Saturday as his bloods were not 100 per cent.

High Definition’s stablemate Roman Empire was bustled to the front by jockey Hollie Doyle, riding for O’Brien for the first time, and set the pace. A healthy advantage opened up for Roman Empire turning for home and Doyle sensed an opportunity to kick on.

It seemed as if Doyle had judged the move to perfection but as Roman Empire began to tire in front, Hurricane Lane and Megallan began to make progress from the back as High Definition was stoked up by his jockey Ryan Moore.

Hurricane Lane and Megallan went head-to-head inside the distance but it was Godolphin’s colt who gained the day by three-quarters of a length. High Definition ran on to finish a further one and a quarter lengths back in third.

Jockey William Buick was impressed with the son of Frankel’s performance and told ITV Racing: “I was very pleased. This is usually the most important trial and it’s not very often you get a Group 1 winner [Gear Up] in there. It looked like a strong renewal and this race always throws up a live Derby candidate.

“Hurricane Lane is still learning on the job. We got a nice position early on and I was able to leave him alone and build him up how I wanted to. It rode like a good race and this horse will benefit from going over a mile and a half. He has a lovely attitude and loves nothing more than having a battle.

“He’s not comparable to Masar [2018 Derby winner] really. Masar was very quick, whereas Hurricane Lane is a different model but will definitely stay the Derby trip.”

If Hurricane Lane’s next destination is indeed the Cazoo Derby, he will be bidding to follow the likes of North Light, Motivator, Authorized and Golden Horn who have recorded the Dante-Derby double since 2000.

Hurricane Lane certainly has the pedigree to make the step up to a mile and a half having been bred by Philippa Cooper’s Normandie Stud out of the Listed-winning Shirocco mare Gale Force, a half-sister to Group 1 heroine Seal Of Approval.

Under Gale Force’s third dam, Hazaradjat, can be found the Group 3-winning Hazariya, the dam of the Aga Khan’s Harzand who captured the 2016 edition of Epsom’s Blue Riband.

Godolphin sourced Hurricane Lane for 200,000gns at Book 1 of the Tattersalls October Yearling Sale in 2018 where he was offered by John Troy as agent on behalf of Cooper.

Hurricane Lane’s victory saw him become the 45th Group winner for his sire Frankel and while he has yet to sire a Derby winner, Banstead Manor Stud’s resident did supply 2019’s Epsom Oaks heroine Anapurna.

Frankel’s son Cracksman did go close in the 2017 renewal of the Group 1 when he finished a length behind Wings Of Eagles.

Sir Michael Stoute recorded a seventh victory in the Group 2 Middleton Stakes at York on Thursday as King Power Racing’s Queen Power ran away with the extended ten-furlong contest to win by eight lengths.

Assistant trainer James Savage said: “We thought she was going to be a really nice filly two years ago. Today, everything went right for her, she relaced and got into a lovely rhythm early doors which meant everything went very smooth.

King Power were back in the winner’s enclosure later in the day when Winter Power blitzed her rivals to capture the Listed Westow Stakes over the minimum trip of five furlongs. She was providing her trainer Tim Easterby with a double of his own after Copper Knight had won the five-furlong handicap that opened Thursday’s card. 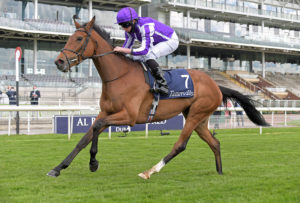 Up Next
Snowfall bursts into Oaks reckoning