News of the death of Dessie Hughes understandably lent a subdued note to the racing on both sides of the Irish Sea on Sunday, with jockeys wearing black armbands and periods of silence being observed.

It was not a day for over-the-top celebrations – but, even so, the crowd at Punchestown showed their appreciation of a true champion as the former Champion Hurdler Hurricane Fly lightened the gloom by rolling back the years to post his 20th Grade 1 victory, taking the Morgiana Hurdle for the third time.

Winner of the Champion Hurdle at Cheltenham in both 2011 and 2013, Hurricane Fly is now in the veteran category at the age of 10. He has put together a remarkable career, having packed plenty into the seven years since he proved himself one of the best three-year-olds on the Flat in France by beating subsequent Champion Stakes winner Literato and subsequent Arlington Million winner in the Prix Omnium II over 1600m at Saint-Cloud in March 2007.

Winning 20 Grade 1 hurdle races is a superlative and unparalleled achievement, and the heartfelt pats down the neck which Hurricane Fly received from his regular jockey Ruby Walsh as he passed the post two and a quarter lengths in front of reigning Champion Hurdler Jezki on Sunday said it all. His achievements are a wonderful tribute to this tough, heroic, little son of Montjeu, and to the skill of his trainer Willie Mullins. 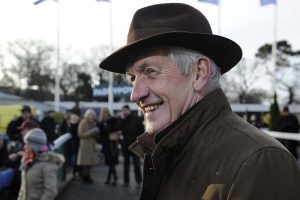 Up Next
Dessie Hughes dies at 71