Just over a week ago Brian Hughes landed a remarkable 889/1 five-timer at Musselburgh, while finishing runner-up in the other two races on the card.

Hughes’ first success of the day came in the Novices’ Limited Handicap Chase aboard Waiting Patiently for his boss Malcolm Jefferson, who is enjoying a fine recent spell.

Sent off even money favourite, the 31-year-old produced the gelding after the second last and the duo quickly established a growing lead coming to the last. The pair winged the last securing a comfortable seven-length success from the Venetia Williams-trained Burton Port.

Next up was division one of the Betfred Racing ‘Like Us On Facebook’ Handicap Hurdle. He was reunited for the first time in two years with Kenneth Slack’s eight-year-old Discoverie.

Having sat in a close second through most of the two mile trip, Hughes kicked on to the front after three out. Although strongly pressed by Mitcd in the home straight with little to separate them, Discoverie responded well to his riders urgings to draw away in the run to the line.

In what turned into the battle of the grey’s coming to the last, under a strong drive the Rebecca Menzies charge managed to get back up thwarting Greyed A and champion jockey Richard Johnson.

The jockey completed the four-timer on Nortonthorpelegend, another from the Menzies yard. Always in the front pair, the son of Midnight Legend soon went clear after the second last under hands riding.

“I came here thinking I had a couple of chances and after I rode the first two winners I was delighted,” said Hughes.

He continued: “To then go on and have four is great and it’s credit to my agent really, who is doing a fantastic job.”

With 64 winners on the board so far this season, Hughes lies third in the jump jockeys’ championship behind Sam Twiston-Davies and reigning champion Richard Johnson.

In the last fortnight he has ridden no fewer than 12 winners and has a solid-looking book of rides at Wetherby on Wednesday and at Musselburgh on Thursday.

Hughes added: “There are plenty of lads in the weighing room who could ride these horses, it’s getting on them that’s the difficult thing.

“I’m the one getting all the pats on the back, but it’s the lads and lasses that look after the horses on a daily basis that really deserve the credit.” 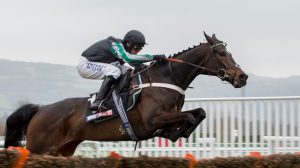 Up Next
Grand start for Altior