Hoping for some Animal magic

Sadly, both Frankel and his much-loved trainer Sir Henry Cecil, who died on Tuesday, will be absent next week but the Queen Anne still holds the key to what promises to be another superb five days of action in Berkshire.

For the first time since 1936, a Kentucky Derby winner will be present at Ascot, the 2011 winner Animal Kingdom having also added this year’s Dubai World Cup to his record and is now on course for an unprecedented international treble.

Though he is a short-priced favourite to complete his mission on Tuesday before retirement to John Messara’s Arrowfield Stud in New South Wales, his English-born trainer Graham Motion issued a note of caution at a media morning on Thursday.

He said, “What we are taking on is a huge challenge and he is probably a short price for what we are doing. When things look too good to be true, it makes me worry more. He still has to go out there and run his race, going into uncharted territory.

“There are so many variables. The weather, distance and doing the training here are all different.”

Despite Motion’s concerns, his five-year-old son of Leroidesanimaux has a temperament which will stand him in good stead for such a major occasion.

“Animal Kingdom is a really laidback horse, like an old steeplechaser,” said the trainer. “He’s very happy at the moment and took a chunk out of my assistant Alice’s finger the other day.

“We’re not ducking anybody and it’s admirable that John [Messara] and Barry [Irwin, breeder and co-owner through Team Valor International] want to do this. It’s been a great experience and for me it’s a relief that all his work is now behind him. I worry more than I should.

“I’ll never train another one like him. The horse has had a chequered career because of his injuries so it is all the more remarkable how he has kept his form.

“What he did in winning the Kentucky Derby was pretty extraordinary – he had never run on the dirt before and he ran with six weeks between races. Coming back in the Breeders’ Cup Mile [in which he was second to Horse Of The Year, Wise Dan] without a prep race is not usually done in America and we almost pulled it off.

“For me personally, I wanted to have an opportunity to prove the Kentucky Derby wasn’t a fluke. I knew this horse was a very special horse and I’m just so glad we got the chance to prove it in the Breeders’ Cup and then on the international stage in the Dubai World Cup.”

Motion, who was born not far from Newmarket at Herringswell, and whose wife Anita formerly worked in the town for Sir Michael Stoute and James Fanshawe, paid tribute to Newmarket’s most famous resident, Sir Henry Cecil, whose passing is to be formally marked at Royal Ascot.

He said, “It’s tremendous to be running in a race that Frankel won last year and Sir Henry Cecil was one of the people I admired the most when growing up in Newmarket so it’s quite emotional.

“My parents knew him and he was one of the people who first captured my imagination to be a racehorse trainer. I grew up six miles from Newmarket and it’s somewhat surreal to be back here with a horse pointing at Royal Ascot. It’s very special and, for me, it’s a dream come true.”

This year’s Queen’s Vase, a race won eight times by Cecil, is to be run as ‘The Queen’s Vase in memory of Sir Henry Cecil’ and jockeys riding in the race will wear black armbands. There will also be a minute’s silence at Ascot in honour of the meeting’s most successful trainer prior to racing on Tuesday. 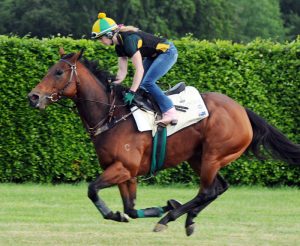 Up Next
Australian challengers primed for action